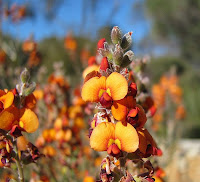 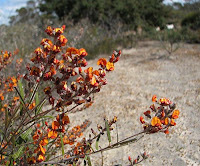 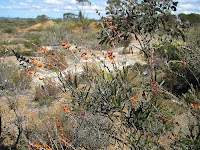 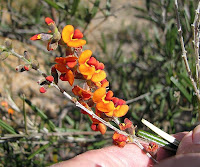 Gastrolobium discolor is another member of the Box Poison Parvifolium Group, which superficially look very similar to each other and it was not until 2002 that they were separated into distinct species. Although several are indigenous to the Esperance region, Gastrolobium parvifolium is not one of them. Gastrolobium discolor however is one of the newly classified species and is quite common to the inland mallee region and nearby mallee habitats, ranging from the Oldfield River NW of Esperance, to Mt Ragged NE of Esperance. It favours moist heavy loams over limestone or gravel, particularly when over granite.

There are several features distinguishing this species from the others and all should be taken into account when determining identification. The most obvious difference is (as its botanical name suggests) the leaf coloration, being olive green on one side and lustrous silver on the other. The older foliage also tends to be wider, being from 5-10 mm and can be flat to curved at the edges, but not strongly recurved. The large orange standard petal is around 10 mm diameter (including the claw) and the flowers are arranged on a terminal raceme of over 25 flowers. It is most similar to G. musaceum, but this species has narrower leaves and larger but fewer flowers in its raceme.

A striking plant when in full bloom with its eye-catching orange coloration and not easily overlooked. This Box Poison can normally be found flowering from August to October, and like the others in this group contain the deadly 1080 poison to deter plant grazers, so no part should be placed in the mouth, although they are quite harmless otherwise.

Posted by William Archer at 7:03 PM