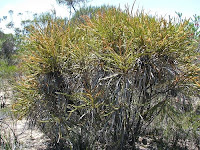 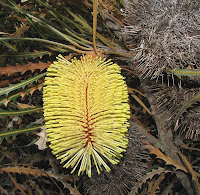 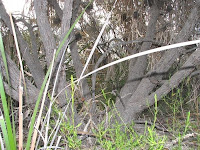 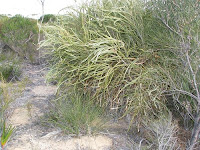 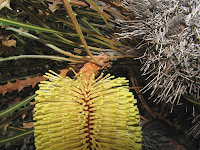 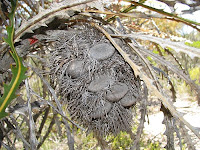 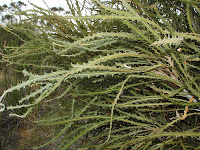 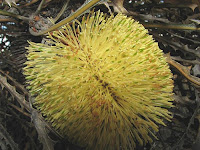 Primarily a shrub of inland regions and even recorded north of Kalgoorlie (over 400 km or 250 miles from the coast). However it just touches the outer NW limit of my designated Esperance region and here is found on a sand and gravelly/clay island surrounded by the mallee with its limestone soil profile. These isolated areas usually produce unusual and interesting plants including species that are otherwise rare to the district. This habitat is also situated on the northern edge of the wheatbelt 100 km (62 km) NW of Esperance with few tracks to regions further north, where undoubtedly many flora treasures are still to be found on other island habitats. The flora growing with this colony of Banksia elderiana are various shrubby plants that are set in an open mallee eucalypt woodland.

The Swordfish Banksia grows to around 3 metres (10') in height and develops an outer dome of leaves that individually are over 40 cm (1' 4") in length and shaped like the bill of a swordfish complete with exceptionally sharp, rigid, blood letting, right-angled spikes, so not a plant you can closely approach without regretting it later when all your scratches and puncture wounds begin to sting. The bright yellow flowers (to 12x8 cm or 5"x3") are pendant-like, with blooms facing downward rather than upright as with most other species. This feature may permit easier access to pollinators as the foliage tends to be far thicker above the flower than below. However with very mature plants, flowers are often buried within a thick screen of tangled live and dead leaves making access from other than very small crawling animals impossible.

A survival trick of this Banksia, is the ability to regrow from a lignotuber after a bushfire, so regrowth is ensured, plus at a more rapid rate in its low and irregular rainfall environment. Perhaps more frequent bushfires, as probably practised by pre-European aboriginal inhabitants, would prevent these plants from becoming cluttered with dead tangled leaves, thereby giving them a more open appearance and greater access to pollinators. Either way, I find these them very interesting and structurally appealing, and of particular attraction is the hollowed dome interior with bare widely branching trunks, which also provide a comfortable shaded daytime resting place for kangaroos.

As the Swordfish Banksia mostly grows in low rainfall areas, the time of flowering is highly variable and dependent on seasonal rainfall, but will usually blossom over a 2-3 month period between January and June.

Posted by William Archer at 3:51 PM