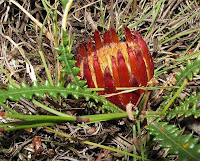 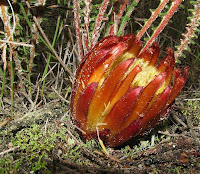 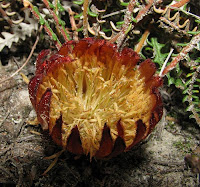 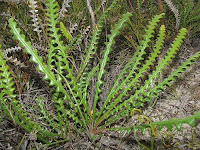 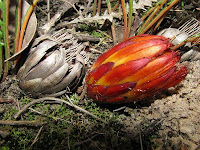 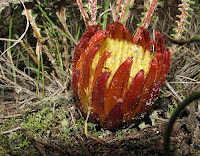 The Shining Honeypot was previously known as Dryandra obtusa, and although in the Esperance region it only occurs as scattered colonies to the north and east, in habitat it can be quite common. Preferred habitat seems to be flat, low-lying (not swampy) sandy soil overlying heavier ones, here there is usually shrubby heath, but with low sedges creating open spaces between. Probably with aboriginal bushfire management, it would have been more open with fewer tall shrubs, but retaining the scattered small mallee eucalypts.

Banksia obtusa is a prostrate shrub, but with toothed vertical foliage of around 30 cm (1') in height, the ground hugging flowers that are over 5 cm (2") long and open to around 4 cm (15/8"), are very similar to South African proteas with colorful outer bracts surrounding a cluster of less spectacular small flowers. The botanical name refers to the rounded leaf lobes, but the common name of Shining Honeypots refers to these glossy outer floral bracts.

Flowering time of these plants is highly variable, which with regular rainfall and a mild summer, can begin to bloom as early as May, but with a dry summer this can be much later with August to November being the recorded period.

Posted by William Archer at 2:27 PM