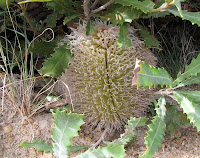 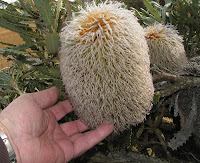 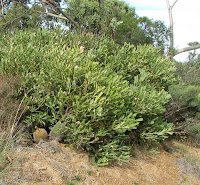 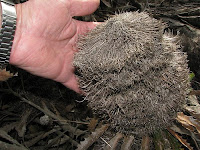 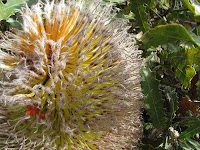 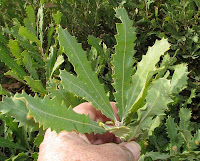 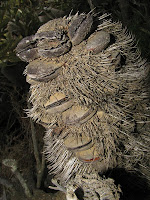 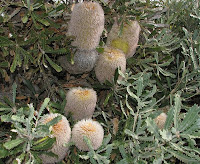 Banksia baueri is also known as the Woolly Banksia and in the Esperance region it is still common, but largely restricted to roadside verges to the north and NW of the small township of Munglinup (100 km or 60 miles west of Esperance), the most easterly range of its distribution. In this district and the predominantly wheatfarming/grazing parts, it ranges from 15-40 km, or 10-25 miles from the coast, preferring gentle sloping ground with a sandy soil over a gravelly clay soil profile. Probably this would result in prolonged moisture around the root system, but still a well-drained environment.

The Possum Banksia is a spreading bushy shrub growing to around 2 metres in height (little over 6') although usually less, and can form extensive and impenetrable thickets. However its most spectacular feature is the huge flower spikes that commonly measure 20 x 10 cm (8"x 4"), and with their furry appearance looking like a hunched possum. Often the flowers are nestled into the green leaves enhancing the animal likeness.

Such flowers attract honeyeating birds, but probably also feed the honey possum (a tiny possum-like creature http://esperancewildlife.blogspot.com/2008/06/honey-possum-tarsipes-rostratus.html) along with various insects. The dense nature of the shrub would also provide a safe environment for nesting birds, plus a great place for many ground living animals to live permanently, or to take refuge. Locally, the flowering period is from April to August, but irregular seasonal rainfall could alter this timing slightly.