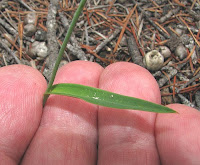 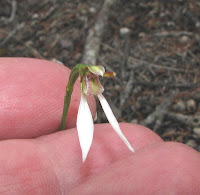 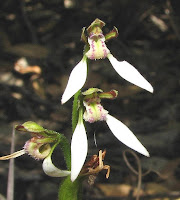 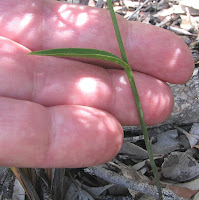 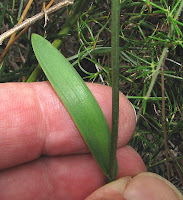 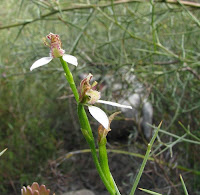 I have a number of misgivings about this subspecies, which I shall explain further down the page. However I shall start by showing three orchids that meet the specifications as detailed in Nuytsia Vol. 16, Number 1, 2006, by Stephen Hopper and Andrew Brown, which is the current official classification. Already there is one variation made by the authors in the 2008 publication of the Orchids of Western Australia by Andrew Brown et. al., where the soil type habitat has been broadened to include other soils (apart from the calcareous coastal type), than is specified in the Nuytsia paper. This change was obviously necessary, as initially most of the Broad-leaf (my name) Bunny Orchids had been omitted in the publication, for they are present in most soils, including where the reclassified orchids apparently do not occur.

Basically Eriochilus dilatatus subsp. dilatatus has a longer leaf (over 3 cm or 11/4") and broader (to 1 cm or 3/8") than other subspecies recorded for the Esperance region, although to complicate matters, exceptions apparently do occur. They often grow to 40 cm or 1' 4" and have between 1-7 flowers. The flower coloration is apparently much paler than other species, in particular the Pretty Bunny Orchid, Eriochilus pulchellus. The first three orchids above with their individual leaves (shown alongside), would concur with the official description and of which I have no problem.

Other forms and anomalies below 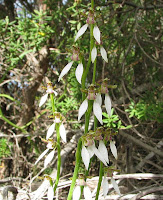 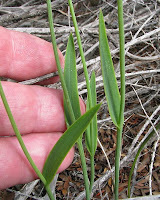 The photos above with multiple flowers are interesting, as the older flowers (at the bottom), appear much lighter than the latest flowers (at the top) on the same plant. This small group of orchids were growing on gravel soil at the base of a granite outcrop. 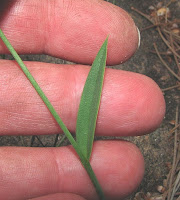 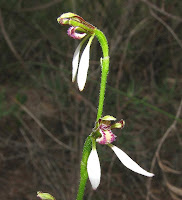 The flowers in the photos above look very much like the Pretty Bunny Orchid, E. pulchellus http://esperancewildflowers.blogspot.com/2009/05/pretty-bunny-orchid-eriochilus.html, but have a leaf more like the Broad Bunny Orchid, ie 4 cm or 11/2" in length, whereas the Pretty BO is reported to be only 1.4 to 2 cm, or 1/2"-3/4" in length (less than half the size). This plant and others of similar appearance were growing on a granite outcrop, although not on a sward of moss, but on shallow soil in the shelter of tall shrubs. 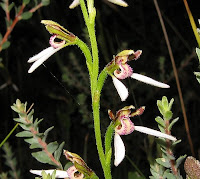 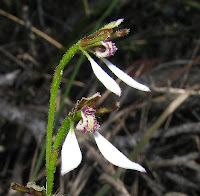 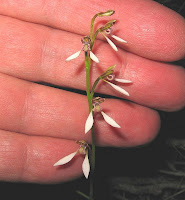 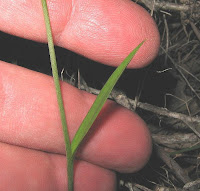 The photos immediately above also have a similar appearance to the Pretty Bunny Orchid, E. pulchellus, and are quite common growing in a heathland community on acid sandy soil in the shelter of trees and shrubs. These plants have a much longer leaf, ie 4 cm or 11/2" in length, like the Broad-leaf BO.

Interestingly, one of the cited specimens in Nuytsia that was used to represent the Pretty Bunny Orchid, E. pulchellus, was collected just around the corner from me. This area is similar to the habitat of the orchids shown above, but there is no granite outcrop despite the site being named after a granite outcrop that is at least 500 metres away. I would suggest that the collected orchid was the same as the ones shown above.

So what is going on here?1. The Pretty Bunny Orchid, E. pulchellus has a more variable growth habit, particularly regarding leaf size?
2. The Pretty Bunny Orchid, E. pulchellus occurs in more habitats and soil types than is currently recorded?
3. The Broad-leaf Bunny Orchid - Eriochilus dilatatus subsp. dilatatus flower is more variable regarding color than is recorded?
4. The orchids with a darker colored flower are hybrids between the Pretty Bunny Orchid and the Broad-leaf Bunny Orchid? However if this is the case, then virtually all orchids in the sandy heath, and many others on the coastal granite outcrops are hybrids!
5. Flower color fades with age?
6. There is yet another Eriochilus species or subspecies in the Esperance region.


The confusion above illustrates the problems with identification of some widespread and highly variable orchid species, which with certain characteristics may be numerous in one habitat, but is represented by different characteristics in another. Plant collectors as they wander through the bush, invariably collect the most unusual forms of the common species from an area, which is pressed and sent off to the herbarium, these unusual forms then become representative of the region, although they may only represent a small portion of the population. This is one of the problems experienced in more remote regions of which Esperance with its relatively sparse population (less than 20,000) and being a good days drive from Perth, is a good example.