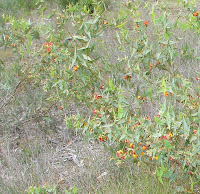 
Not common in the Esperance district being largely distributed further west towards Perth. Mostly found in small colonies a little inland on heavier soils particularly with a rocky substrate, but usually within the agricultural zone. Plants in the genus Gastrolobium are renown for their high concentrations of sodium monofluoroacetate (1080 poison) and were largely responsible for large stock losses during the early days of settlement. Some otherwise suitable grazing lands were avoided until it was discovered these plants were responsible for the deaths, then many were destroyed, but fortunately they are mostly well represented today in bushland areas.

Many Gastrolobium species although equally poisonous, were not consumed by stock due to extremely prickly foliage and the rocky habitats where they grew. This species Gastrolobium spinosum would be one of those as it is well named as 'Prickly Poison' due to the several heavy duty spines on the leaves. However, these plants can be very attractive and structurally appealing and are no more dangerous than some ornamental species like the popular and widely planted introduced Oleander plants.

Flowering is very dependant on the weather, particularly rainfall and can occur at various times of the year, but between August and January is the more regular period. Very interesting plants to encounter, providing you don't try to eat them.