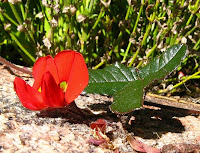 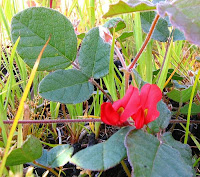 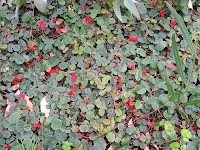 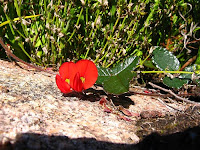 A prostrate plant of several metres diameter (2 metre or over 6' trailing stems) with striking deep red flowers that locally commonly occur in pairs. Very prolific a year or two after fire when they can carpet the ground, but as other slower growing and taller vegetation get bigger, they are smothered and die off, leaving only those near open ground to survive for more than three to four years. They are to be found in the heavier moisture laden soils of low lying heathland areas, on gravelly soil and granite outcrops extending to inland mallee regions.

Easily recognised by the strongly veined oval shaped leaves, which are not undulate (wavy-edged) and the (2 cm or 3/4" diameter) relatively short stemmed flowers. In sheltered locations, Kennedia eximia can flower from June to December, bearing in mind there are usually a number of plants growing together and fresh blooms are developing as stems lengthen.