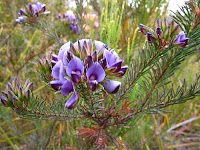 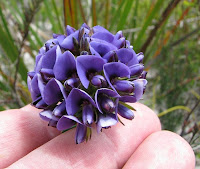 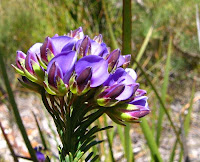 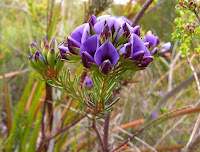 Previously known as Burtonia conferta, it is a widespread shrub of less than a metre (usually under 3') in height, but seldom occurs in large colonies. It is however often pleasurably encountered accidentally when in flower, in sandy heathland, around granite outcrops or gravel pits, but otherwise gos mostly unnoticed.

Gompholobium conferta is usually an open shrub, with upright stems that are densely clothed in narrow-linear leaves to 2 cm (3/4") in length. Interestingly, Gompholobium leaves are mostly deeply divided into leaflets (some need close examination to distinguish this feature), but G. conferta is one of the few with undivided leaves. The eye-catching blue/purple blooms are unmistakable by their many flowered heads that are 5 cm (2") or more in diameter.

Recorded flowering from August to March, but this is from plants spread over nearly 1000 kilometres (620 miles), from Israelite Bay (east of Esperance) to north of Perth (almost to Geraldton). In the Esperance district, November to February would be more the norm.