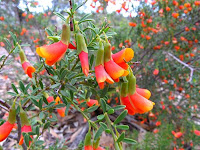 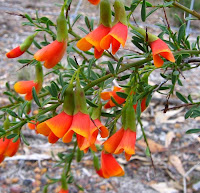 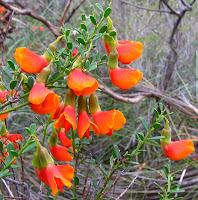 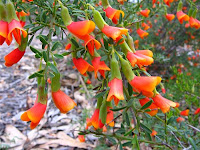 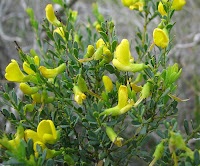 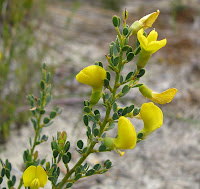 
A common shrub to 1 metre (around 3') that gos largely unnoticed until it comes into flower, when it then screams its presence with brilliant 1.5 cm (over 1/2") long scarlet flowers. It is a reasonably open shrub with small green leaves and a sharp spike terminating most branches (easily avoided with a little care). This is one of the pea-flowers that attracts honeyeating birds, which is probably the reason for its colorful display. Bossiaeas typically have a long narrow flower making identification relatively easy.

This Bossiaea is usually found in low-lying sandy heath with light seepage, also it will contentedly grow in semi-shade amongst larger shrubs and tall sedges. However, they will also thrive in more exposed locations providing the soil is cool and moist as is encountered on low sandy rises along flood plains, or run-off from rocky slopes.

Flowering is from April to October, with June and July usually providing the best displays.

Update 4/04/2010
Two photographs added showing a bright yellow flowering form, it was discovered in September near Quagi Beach 55 km (34 miles) west of Esperance. Here it was common although localised growing in a white sand (probably non-calcareous due to leeching) over limestone.