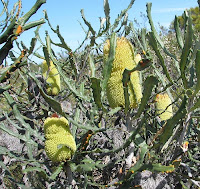 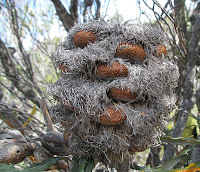 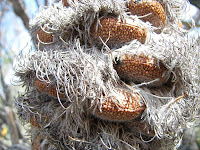 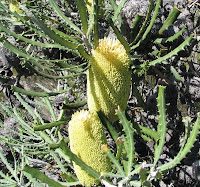 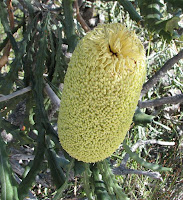 A bushy spreading shrub 2-4 metres (6'-12') in height that looks very similar to Banksia media and will in some locations even grow together. However they are easy to separate with B. pilostylis having the smaller flowers (rarely more than 12 cm x 6 cm diameter, or 5" x 2.5"), compared to B. media that are commonly around 16 cm x 8 cm diameter (over 6" x 3"). The styles (easily seen on the seed capsule) are very hairy on B. pilostylis, but hairless on B. media. Another distinction is B. pilostylis grows as a bushy shrub, whereas B. media is generally a small tree, particularly in the areas where they grow together.

In the Esperance district, Banksia pilostylis generally grows a little inland ie, approximately 20-60 km from the coast, usually in deep sandy soil (often low-lying) or on gentle slopes where the sand overlies heavier soil or rock, thereby retaining moisture for longer periods. Odd flowers can usually be found at anytime of the year, but spring and summer is the main flowering period.