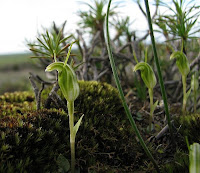 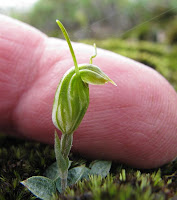 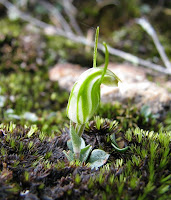 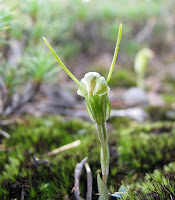 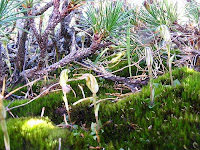 
This greenhood is one of a number of undescribed Pterostylis species (see update 23/12/08 below). I am not 100% if my photographs actually represent this orchid as there are no published details, but as can be seen above, they are an extremely small (and probably the smallest) greenhood orchid, which aptly reflects the word 'miniature,' plus according to the distribution map in FloraBase, it is recorded from the same area as my finds.
http://florabase.calm.wa.gov.au/browse/profile/18647

This miniature greenhood is between 20-30 mm (1") in height and grows through the moss on granite outcrops in association with Borya nitida (that is one of the resurrection plants, which look dead and brown during dry periods, but resurrects to living green during good winter/spring rainfall. It can cover large patchy areas in shallow soil over granite and has very prickly foliage). I have photographed these orchids during July and August and doubt if they would extend far into September.

Update 23/12/08
Now known as the Esperance Snail Orchid, as detailed in the publication 'Orchids of Western Australia' by Andrew Brown et.al. Apparently it can also grow to 6 cm (21/4") in height.