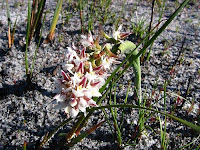 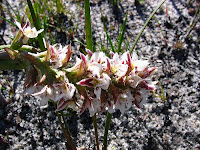 
I have only found a single plant of this species, and that was a very poor specimen. It was growing in sandy soil above an ephemeral swamp after a summer bushfire and has not reappeared since. This orchid reminds me more of a Hyacinth bulb with the very compact flowering spike, and I imagine a number of them would produce quite a display. From reading about this species, it would seem to favour rocky soils, so my plant was possibly just a blow-in.

Normally flowers from late August to October.
Posted by William Archer at 5:12 PM