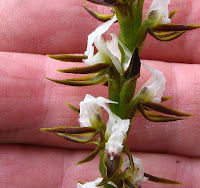 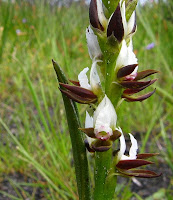 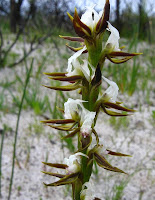 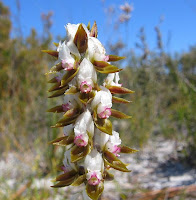 
A widespread orchid after summer bushfires, but no where common. It is usually scattered singly or a few plants on flat to gently sloping sandy soil, but although often found within a stones throw of low-lying swampy ground, it generally prefers more elevated locations with better drainage. The Frilled Leek benefits from summer bushfires by producing more flowering plants, but odd ones can still be found in unburnt country providing it is not overgrown by larger shrubs.

Easily identified by the white lateral sepals and the long slender frilled labellum. It grows to half a metre (1'-6") and can often be spotted from some distance, flowering above low regenerating heath. Normally in bloom by late August, September and October.