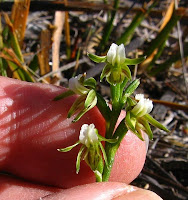 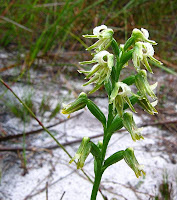 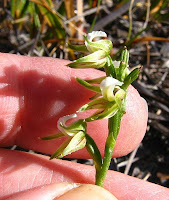 
Also called the Scented Autumn Leek Orchid because of the strongly scented flowers. In the Esperance region it is quite common although rarely occurring in sizeable colonies, but mostly singularly or in small scattered groups. It is one of those orchids that you happen upon, because it you specifically look for them, chances are you won't find any. It is usually found in low-lying areas with sub-surface moisture, or around ephemeral swamps and granite outcrops. The flowering period is from April to July and is dependent on the timing of autumn rains (earlier rain results in earlier flowering).

The Autumn Leek Orchid is not reliant of summer bushfires to flower, but being a smallish orchid, it can quickly become smothered by larger plants, so periodic fires to reduce this competition is an advantage for its continued welfare.