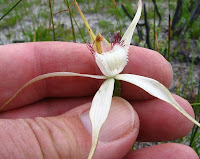 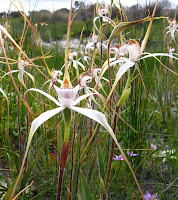 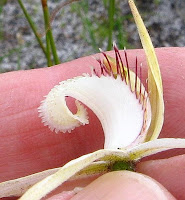 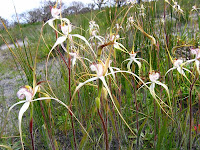 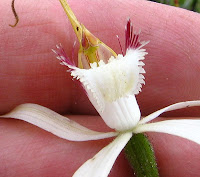 
A very beautiful orchid of similar size to the Esperance White Spider Orchid, but is usually found in the heavier soils on rises around coastal saltlakes. It can be very difficult to tell these orchids apart as they hybridise with other C. longicauda subspecies and with the Esperance King Spider Orchid, so where their territories overlap there will be orchids with greater or lesser genetic influence from the mix.


This particular subspecies is as its common name suggests, stark white, plus the thickly glandular portions of sepals and petals are usually longer and finer, giving a more wispy appearance. They also tend to clump more, although solitary orchids are also common. So habitat, color and overall appearance are probably the best indicators in the field. However, classification of these orchids is based largely on the measurement of their parts, and that requires detailed laboratory inspection.

The Stark White Spider Orchid blooms heavily after summer bushfires, but will also produce flowering plants without them. Normal flowering period is September and October.