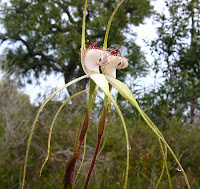 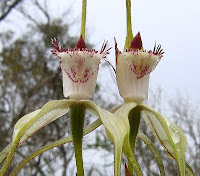 A common orchid in the district and one of the largest with flowers to 20 cm x 14 cm, so not one easily missed. It readily hybridises with the Esperance King Spider Orchid, Caladenia decora and other subspecies of Caladenia longicauda, so in areas where they overlap, positive identification can be very difficult and only solved by measurement of the orchids parts.

In near coastal areas near Esperance, the only other orchid that can cause identification problems is Caladenia longicauda subsp eminens, the Stark White Spider Orchid. The only way I separate them is subsp eminens is whiter with long fine sepals and petals and sometimes a narrower labellum.

The hybrids between the Esperance White Spider Orchid and the Esperance King Orchid are more readily identified by the red/pink coloration of the sepals, petals and the labellum. However some of these are the largest and most spectacular of the local orchids.

Apart from Caladenia longicauda subsp eminens, this orchid is very distinctive and not likely to be confused with other species. It flowers profusely after a summer bushfire, but is still well represented in unburnt habitat in low-lying areas, particularly around or near ephemeral swamps and granite outcrops. Normally flowers from August to October.

Posted by William Archer at 7:28 PM