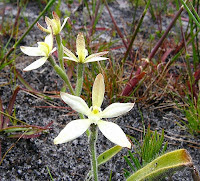 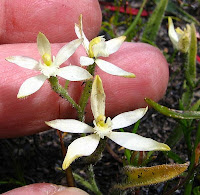 
Not to be confused with white forms of the Pink Fairy Orchid, Caladenia latifolia. This species generally flowers later than the Pink Fairies. Not only that, but also has smaller flowers and grows in low-lying areas around ephemeral swamps and granite outcrops, plus has congested brown hairs on the rear of its sepals and petals. There are many other differences too including only being white in color, which is plain to see as they invariably occur in colonies, particularly after summer fires.

The flowers of the White Fairy Orchid are said to smell like spoilt milk in order to attract small flies that will cross-pollinate them as they move around the orchid colony. Caladenia marginata flowers from September to early November.