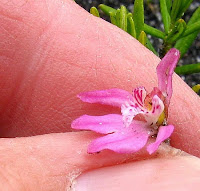 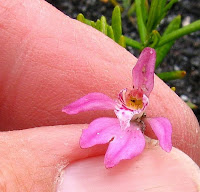 
This orchid is a very unusual sighting in the Esperance region as it normally only occurs to the west of Albany. However it is likely to be one of those plants where you must be in the right place at the right time. It was found on stabilised alkaline dunes after a summer bushfire and did not flower the following season. So timing was most important and as Esperance does not have many orchid specialists, those plants that only appear rarely are easily missed.

The flowers are considerably smaller (to 25 mm or 1"), than Caladenia latifolia, Pink Fairies which it resembles, but the short broad sepals and petals, plus the joined lateral sepals quickly distinguishes it as a separate species. This Little Pink Fan Orchid occurred in small groups from September to October.