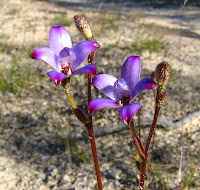 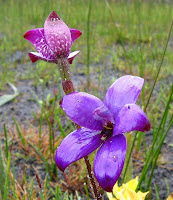 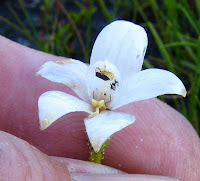 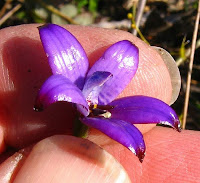 
A striking glossy purple flower (occasionally white) 25 to 35 mm in diameter and standing to 300 mm in height, but usually much shorter. The white tip of the labellum is recurved from 90 to 180 degrees and has an obtuse apex. Elythranthera emarginata, the Pink Enamel Orchid is also listed in some reference books for the Esperance region, but I have never seen it and it is not now officially recorded from here either, but from the Stirling Range and further to the west. With that species the white tipped labellum is recurved 180 degrees like the Purple Enamel, but is then recurved 180 degrees back again and the tip truncated (cut across without a point).


The purple enamel orchid can occur in sizeable colonies, but is more commonly found in small groups in gently sloping to flat areas below granite outcrops and moist sandy soils in heath environments. Flowers September/October period.
Posted by William Archer at 7:06 PM