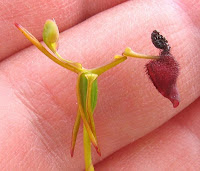 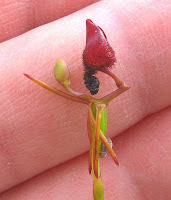 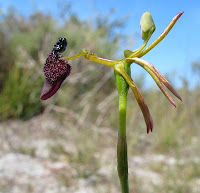 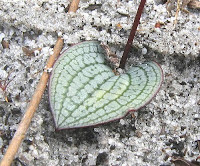 
A very interesting little orchid that relies on small native wasps to fertilise the flowers. The flowers give off a pheromone like scent that mimics a female wasp in order to attract the male. Seeing what looks like the female (the knobbly bit), the male wasp grasps her and tries to carry her off. However this activates the trigger mechanism attached to the pseudo female, which throws the male wasp against the column and sexual parts of the orchid. The wasp picks itself up and tries the same on another flower that does the same thing, except this time the pollen from the first orchid is transferred to the second, thus cross-fertilising it.

Due to the rapidly moving labellum (they can reset themselves), these orchids are also known as Hammer Orchids. They differ from each other by having a different shaped pseudo wasp labellum, meaning they attract different wasp species, so cross-pollination between different orchid species are most unlikely as the male wasps are only attracted to one species of Hammer Orchid.

Usually the fingernail-sized leaf is the first thing noticed with this orchid and the slender flowering stem observed on closer inspection. They are often common in flattish to gently sloping sandy heath (lower lying regions, not on tall sandy hillocks), growing in gaps between low sedges. However, they tend not to occur in compact colonies, but spread throughout a suitable habitat with a few here and a few there. Flowering time is anywhere between August and November, with September/October being the more usual.

Posted by William Archer at 5:37 PM