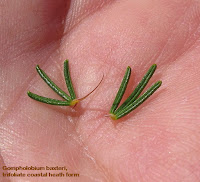 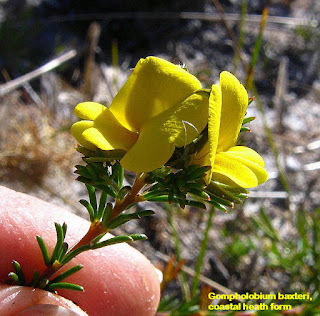 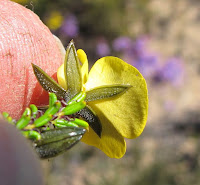 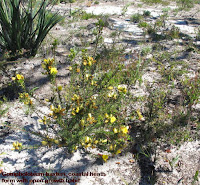 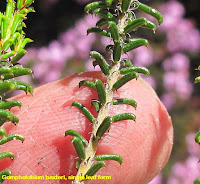 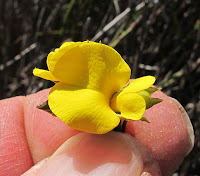 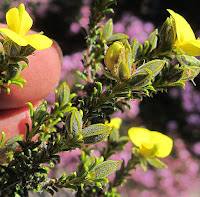 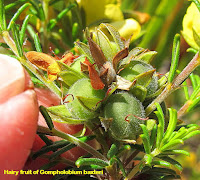 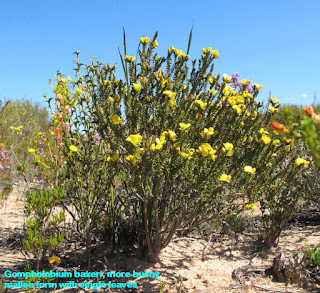 
This plant can be very confusing and easily thought to be two species. One form occurs in the inland mallee and has single leaves, whilst the other is found in coastal heath and has trifoliate leaves. However the canary yellow flowers, viscid buds, hairy seedpods, etc, are identical to both and hence these plants are technically the same species. The mallee form also tends to be much bushier, thereby giving these shrubs a markedly different appearance.

Both forms grow in non-calcareous sandy soils, although at least locally, the coastal form occupies low-lying areas, often around swamps or light seepage zones where the soil would retail moisture for longer periods. Interestingly, there is a very similar looking plant (Gompholobium tomentosum) with slightly smaller and paler yellow flowers, plus the leaves are divided into several leaflets. This plant in undulating country grows immediately above G. baxteri (within a metre/yard), to then exclusively extend to the summit of the sandy mound/hill. It is almost like these species are two opposing sides, with neither crossing over an invisible barrier.

Conversely, mallee forms tend to occupy the higher sandy slopes, but these are often yellow coloured and probably contain additional nutrients compared to the lighter coastal sands. Nevertheless, the mallee environment would be drier and warmer and the single leaf form probably is an adaptation to these conditions. Like peaflowers generally, these plants do very well following bushfires, when there is considerable germination and rapid growth as they take advantage of the more open and ash fertilised conditions. However, after a few years the slower growing, but taller vegetation will eventually push them out.

Gompholobium baxteri, named after an early botanical plant collector is very common and grows in near coastal areas between Ravensthorpe and Israelite Bay and to around 150 km (90 miles) inland. The brightly coloured flowers are produced between August and December and although local weather conditions will influence exactly when, these plants do produce blossom over a long period, providing adequate moisture is available.

Gompholobium is part of the very large and highly diverse Fabaceae family, which includes all legume species, including Acacia. Depending on the classification system in use, Gompholobium may also be listed under Papilionaceae or Leguminosae.
Posted by William Archer at 3:20 PM