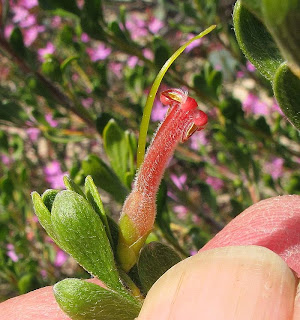 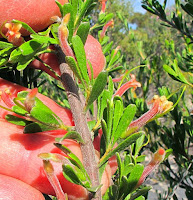 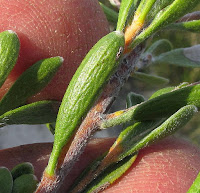 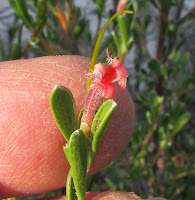 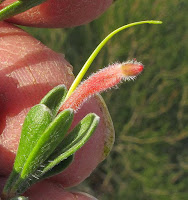 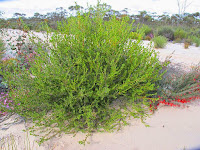 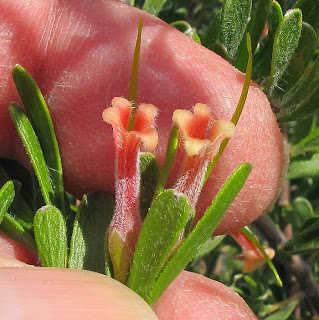 
I know this species from a sandy rise surrounded by mallee woodland a little over 100 km (60 miles) NW of Esperance, although it is far more plentiful in sandy soils in the Israelite Bay region 160 km (100 miles) east of Esperance. It is a moderately bushy shrub to around a metre (3’) in height, but often goes unnoticed.

It has singular flowers, which although being red and growing to 2.5 cm (1”) in length, tend to blend into the bushy dark green foliage and do not draw your attention unless seriously examined. However they are very popular with Honeyeating birds, so are more than adequate for their pollinating purpose. The habitat photo above has a very spectacular red Verticordia mitchelliana growing at the base of the Adenanthos, which from a human perspective was far more eye-catching.

Adenanthos dobsonii is very similar to Adenanthos glabrescens that occurs further west and the species distribution is not known to overlap; it has two subspecies A. glabrescens subsp. exasperatus and subsp. glabrescens. Subsp. exasperatus is only known to occur in the Fitzgerald River area, east of Ravensthorpe and lacks a lignotuber (must grow from seed) and has wider leaves of 3-6 mm (to ¼”). Subsp. glabrescens on the other hand is more common and found from Lake King to the Stirling Range area; it does have a lignotuber enabling it to resprout from the rootstock after fire, plus the similar length leaves are only 2-3 mm wide.

The similar looking Adenanthos glabrescens subsp. glabrescens differs from Adenanthos dobsonii, by having hairless leaves, which grow to 2.5 cm (1”) in length, whereas the leaves of A. dobsonii are hairy and around half the length, plus are generally wider. Both plants have lignotubers.

Like many Adenanthos shrubs, Adenanthos dobsonii is long flowering and can usually be found in bloom at most times of the year. This feature makes it a very important plant for nectar eating animals, including the Honey Possum, Honeyeating birds and nectar feeding insects like moths, etc. that have a long proboscis.

Adenanthos is part of the exceptionally diverse Proteaceae family.