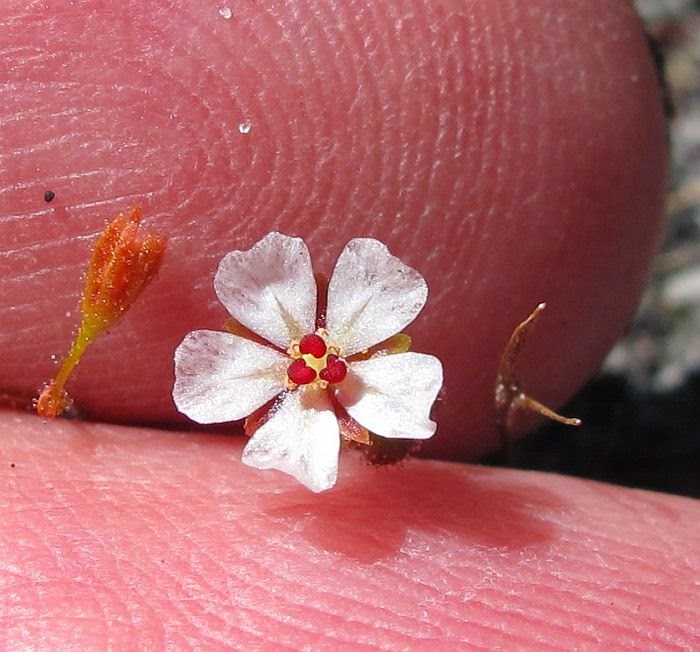 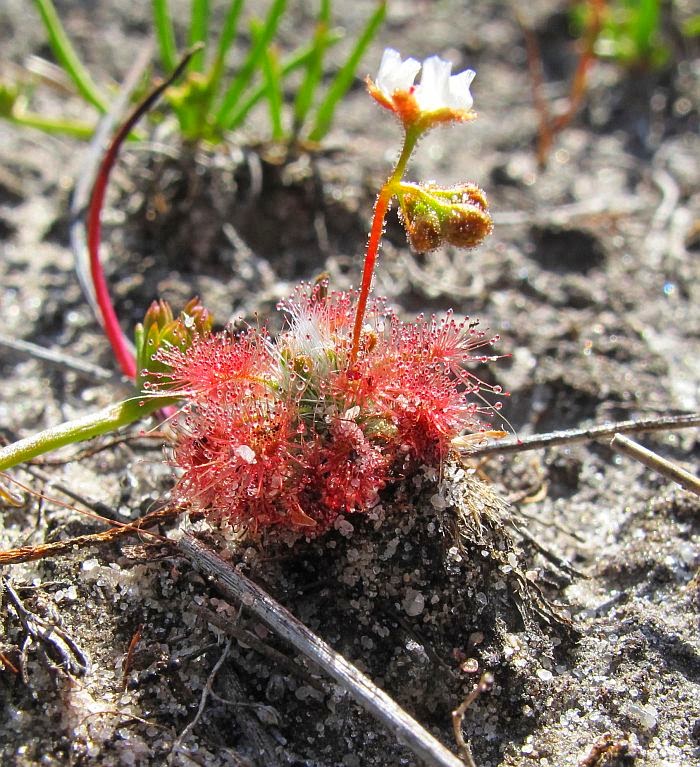 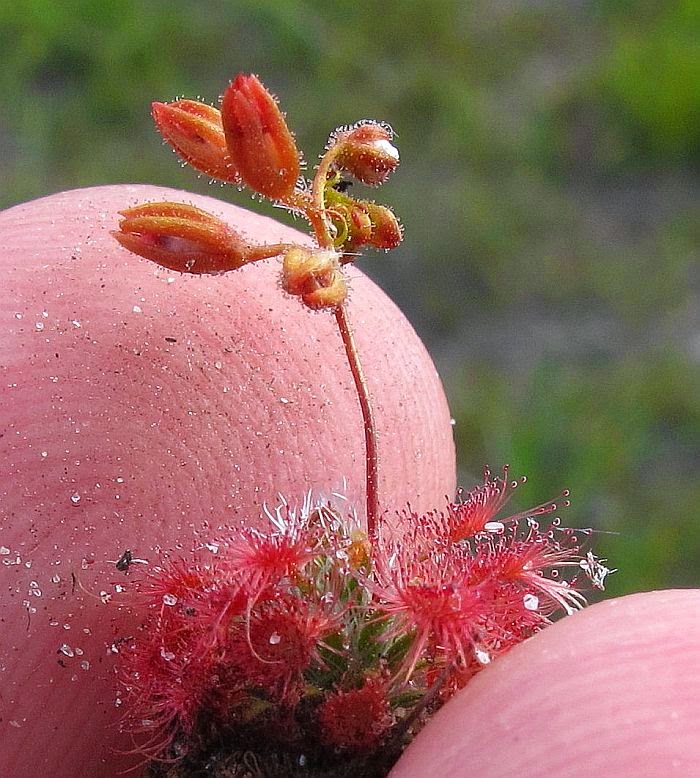 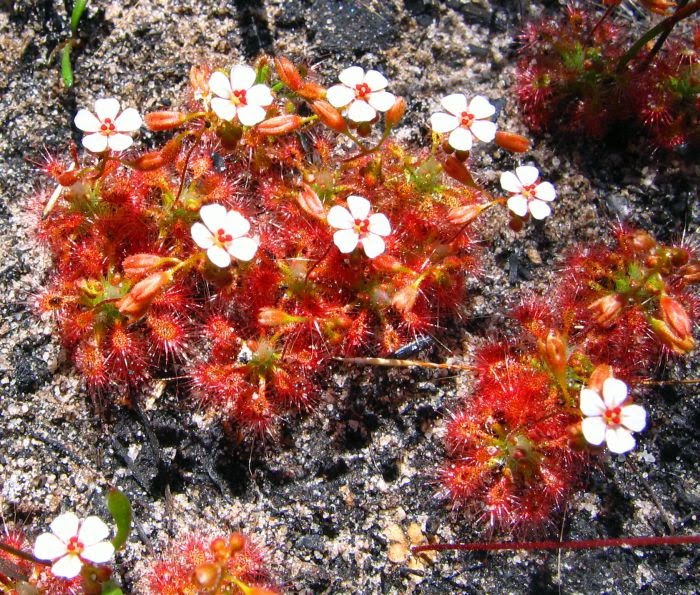 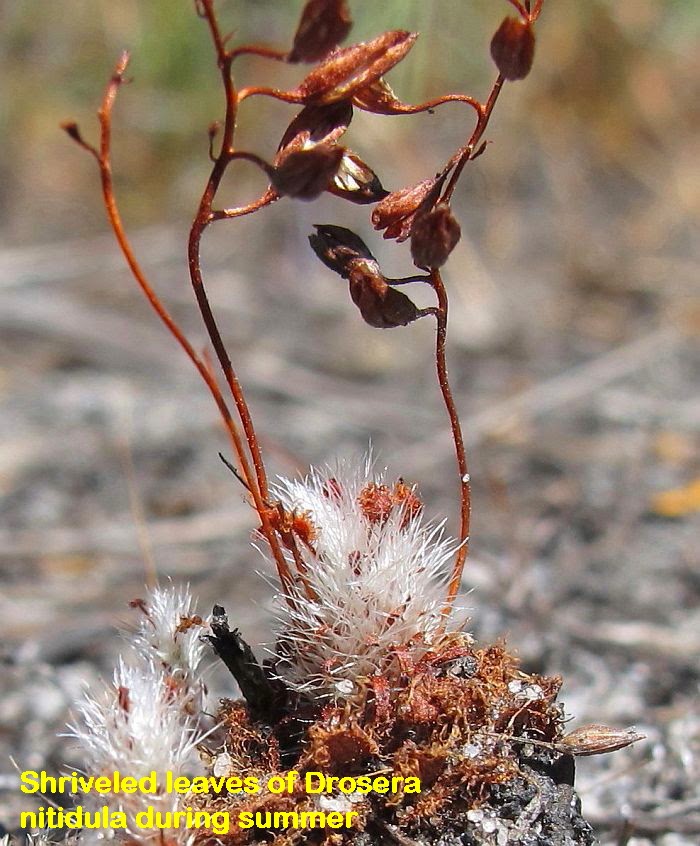 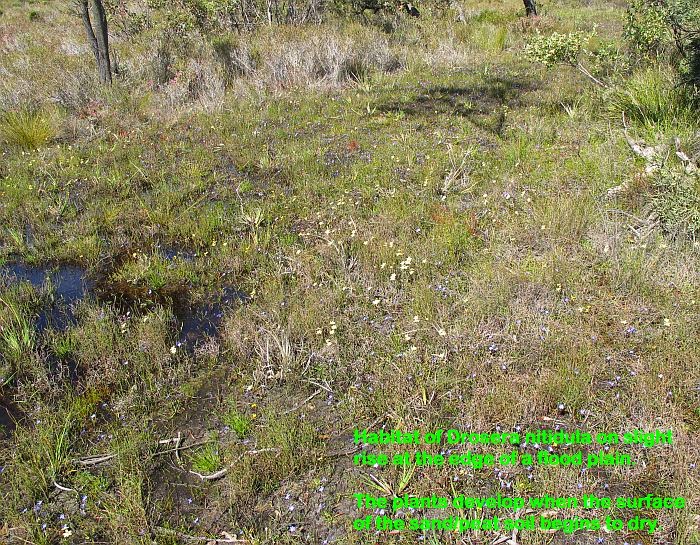 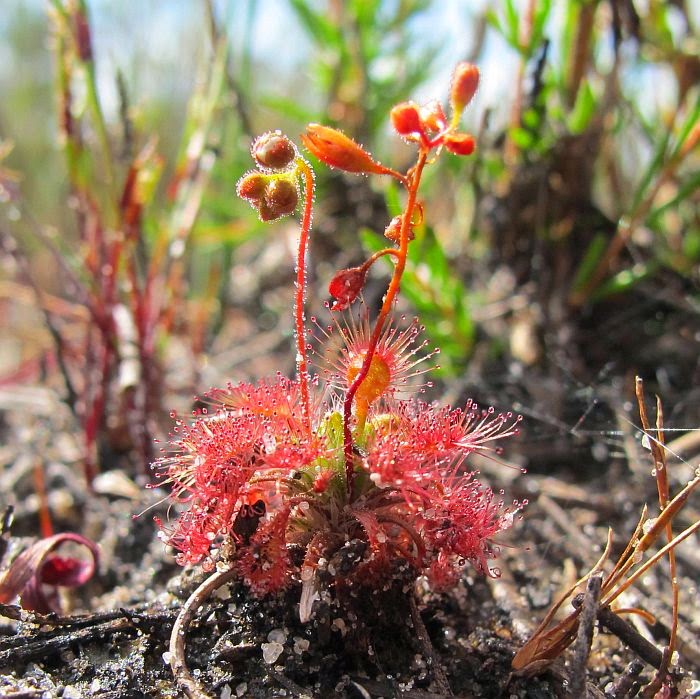 Drosera nitidula  -  Shining Sundew
The local habitat of Drosera nitidula is quite interesting and illustrates the subtle difference between its requirement and that a more common species Drosera pulchella. They are both found in swampy environments that may be inundated for short periods, but locally they do not grow together. The difference is D. pulchella is common in swamps or strong seepage areas, whereas D. nitidula is found on the edge, or low rises along flood plains in a silt/sand soil.
The difference between a swamp and a flood zone is the movement of water. Swamp water moves slowly or not at all, largely reducing in size by evaporation. Flood plains on the other hand, the water slowly moves through the area due to gravity, often ending up in a swamp. This means in the dominant winter rainfall of Esperance, the habitat of Drosera nitidula can be sodden after heavy rain, but as the habitat slowly dries at the approach of summer, the ground becomes completely dry and then the leaves shrivel and die.
Drosera nitidula is a perennial, therefore normally survives the hot dry summers to await the next wet period (including heavy summer storms) when new leaves will appear from between the long stipules of the stipular bud, which has protected the plant during its dormant phase. Drosera pulchella will often fully retain its leaves, as its habitat is more likely to remain moist throughout the dry summer period and possibly due to this compatible environment, the plant is more widespread.
The Shining Sundew although small (1.5 cm or 5/8” diameter) is well named, as the leaves glisten a bright orange/red. However it is even more identifiable by its large dark red orbicular stigmas, which besides a rare hybrid, is the only local Drosera to possess them. The hybrid is known as Drosera x legrandii that is only known from a small colony in the Cape Le Grand region (east of Esperance), it has 4-5 clavate (club shaped) blood red stigmas.
Drosera nitidula mainly occurs in the Perth to Albany region and around Esperance. It is recorded flowering from November to January
Drosera belongs to the Droseraceae (Sundew) family.

Posted by William Archer at 1:15 PM