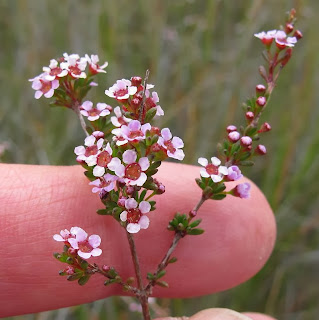 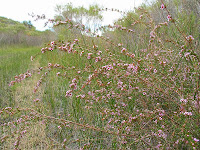 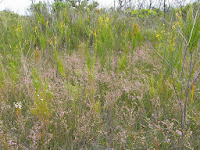 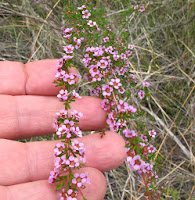 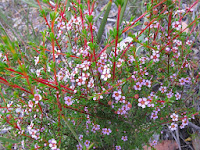 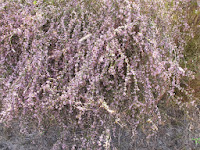 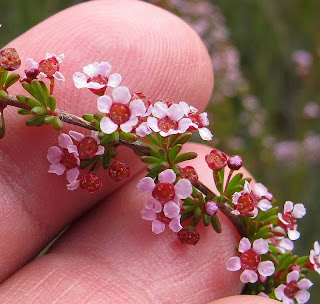 
This pretty pink flowering shrub with red new stems has caused much botanical confusion, having been long lumped with the Baeckea genus due to its reduced number of stamens that vary from 5-11 and not unlike the Baeckea taxa with 5-10 stamens. Whereas Astartea generally have 15 or more that are grouped into 5 bundles. However other features placed it close to Astartea and hence why it was initially called B. astarteoides (astartea + oides = like).

It commonly grows to 1 metre in extensive open colonies in seasonally wet areas around swamps, seepage zones and flood plains. Usually it comprises several arching stems festooned with long-lasting small pink flowers to 6 mm (1/4”) diameter, which continue to be produced as the young red stems grow. It can reach 1.5 metres (5’) in height and be quite bushy, but this is where there are other shrubs or structures to rest against.

Restricted to non-calcareous moist sand/peat soils, it occurs in near coastal habitats from Esperance to Cape Arid, an easterly distance of around 150 km (95 km). It is recorded flowering from October to November, but if the ground remains moist, can continue to the end of December. There are many Baeckea and Astartea spp. in the Esperance region, but none that closely resemble this species.

The genus Astartea is a member of the large and highly diverse Myrtaceae family.