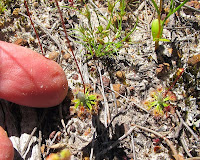 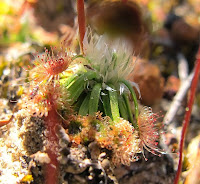 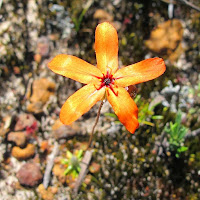 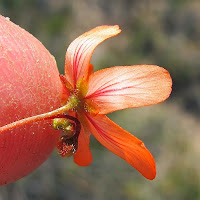 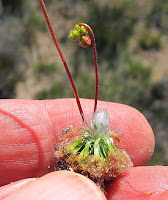 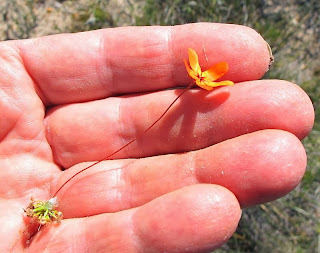 Drosera leucoblasta - Wheel Sundew
This rather striking sundew has large orange and red flowers that are bigger than their basal rosette. It is a WA endemic with a broad home range that spans from Kalbarri to Cape Arid, then southwest to a line between Perth and Albany.
Drosera leucoblasta favours the non-calcareous gravel/clay soils, often with a sand covering. Around Esperance it prefers near coastal environments rather than further inland where suitable habitat also exists, but where the rainfall may be too irregular during its flowering period.
The only other Pygmy Drosera this species might be confused with is D. echinoblastus that is recorded in near coastal locations between Perth and Geraldton, so well outside my area of interest. However for those in that region, the flowers of D. echinoblastus lack the deep red centre of D. leucoblasta, plus it has more deeply serrated stipules (central white vertical strands). Also D. echinoblastus has between 9 and 12 flowers, whilst D. leucoblasta 9 or fewer flowers.
As a further identification aid, both species above have 3 linear stigmas, a feature that separates them from most other Pygmy Droseras. Drosera leucoblasta is recorded flowering from August to November, although exact timing would probably (depending on local weather conditions) vary over its considerable distribution.
The Drosera genus belongs to the Droseraceae family.

Posted by William Archer at 6:10 PM