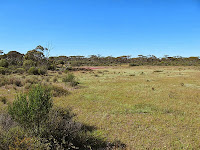 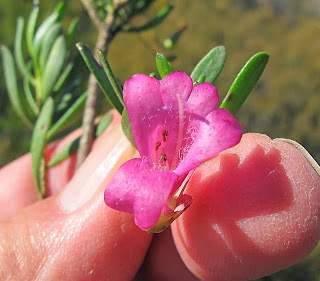 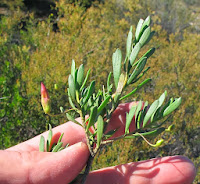 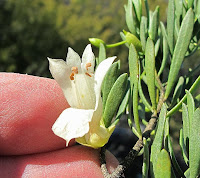 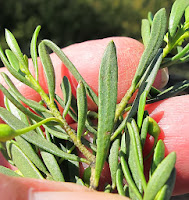 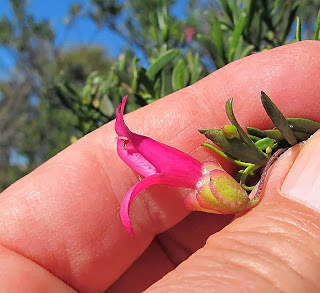 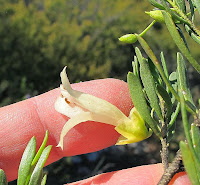 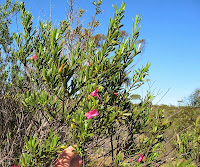 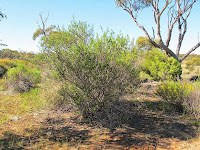 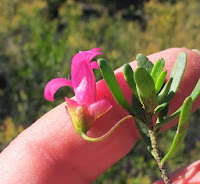 Eremophila alternifolia – Broad-leaf Form
Aboriginals had many uses for this plant and dried foliage was commonly carried with them for medical and/or ceremonial occasions. Medically it was used as an antiseptic and to alleviate pain and fever; the foliage contains verbascoside, which is antibacterial, an antioxidant and has analgesic effects. It also dilates blood vessels to reduce blood pressure and apparently helps to induce sleep and promote general well-being (1).
Another possible reason for this species widespread use is its exceptionally large distribution, fanning from the Meekatharra region (mid NW of WA) to Central Australia (NT) and to the Nullarbor, then through SA into the outback of NSW, so would have been available to many Aboriginal groups.
Being so widespread Eremophila alternifolia is highly variable especially in regards to foliage, with most inland forms having linear-subterete foliage to 4 cm (over 1 5/8”) in length, whereas populations on its southern boundary are more like those above, being much broader and shorter (2 1/2 cm or 1” in length).
The flowers also vary, with some having pronounced spots on the outside of the flower, whilst some have none; the colour can be red, pink or cream. However they do not vary in the shape of the broad recurved lower petal, which apart from a narrow pointed tip, is truncated at the end. The sepals are glabrous (without hairs) and have many small veins (better seen on dry specimens).
Some shrubs of Eremophila alternifolia have been recorded growing to 5 metres (16’) in height, although locally they rarely exceed half that size. They are not common in the Esperance region and only occur in the northeastern sector, where they favour the edges of open plains, growing in a red loam over a crumbly a limestone substrate that permits deep root development.
The open plains have a similar soil, but overlie a very hard limestone where silica has been dissolved by water movement (sometimes hydrothermal) and reformed to produce a calcrete, which is a very hard cemented material that roots cannot penetrate. Another local similarity is the limestone/calcrete overlies or abuts low-lying granite outcrops, which is evident in the habitat photo by the distant red blossom.
The Eremophila genus is the major potion of the Scrophulariaceae family (synonymous Myoporaceae).
Reference:
(1). Indigenous Knowledge and Pharmaceuticals by M Pennacchio and E L Ghisalberti.
(2). Eremophila and allied genera by RJ Chinnock.