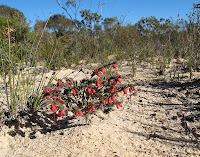 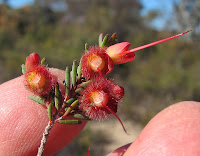 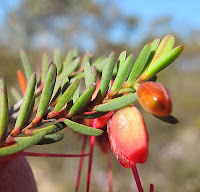 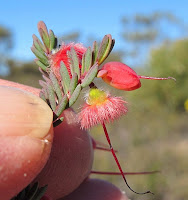 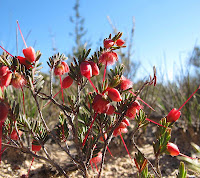 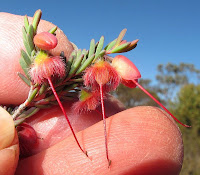 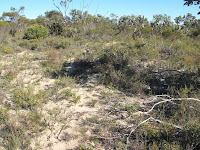 
This pretty little Verticordia is amongst the first to flower, often doing so in July, it is also one of the smallest and in the above colony the largest plant was only 10 cm (4”) in height and 20 cm (8”) in width.  It only just gets into the Esperance zone being more numerous further west and north of Albany.  It can be found in coastal districts, but is far more common inland in the Lake Grace to Frank Hann National Park region.

The flowers initially have two large pink/red deciduous bracteoles that fall quickly as the flower develops.  These are replaced by the sepals that comprise mostly red thread-like segments, but also include thicker black ones that create extra strength and an additional barrier to keep non-pollinating insects at bay.  The sepals reflex to 90 degrees thereby doubling the flower size and increasing their visual impact on any passing pollinator.

Under the sepals are large hairy edged petals that remain closed or only slightly open around the long style, and would mostly likely stop insects like ants from plundering the nectar reward intended for the correct pollinator.

With all the floral protection, it would need something larger and stronger than most insects to penetrate the defences, something like a bird or small mammal, both of which are known to pollinate certain Verticordia species.  Interestingly most red flowering Feather-flowers are pendant and usually hang within a few centimetres/ inches from the ground or lower spreading branches, so permitting easy access for non-insect pollinators.

Soils in this instance were a moderately coarse sandy loam over gravel, of which the vertical root system penetrated deeply.  Flowering is recorded from July to November.

The genus Verticordia belongs to the exceptionally large and diverse Myrtaceae family.