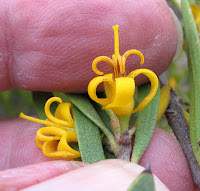 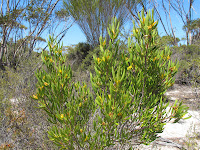 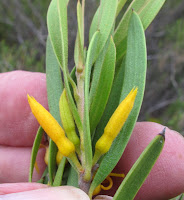 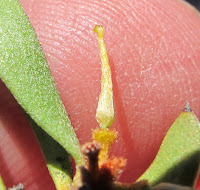 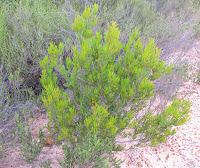 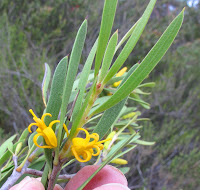 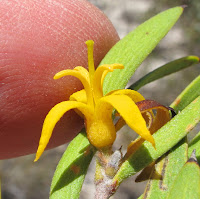 
Persoonia trinervis is a highly variable species, especially regarding leaf shape. The plants photographed above are possibly from its most easterly colony, where common (although localised) at Lake Tay, 140 km (90 miles) NW of Esperance; here it grows in deep yellow sand possibly over gravel. It is a handsome bushy plant to a little over a metre (4’) in height with golden yellow flowers.

Its normal range is from Badgingarra (midway between Perth and Geraldton) and spreading in a broad band to the Lake King region 100 km (60 miles) west of Lake Tay. Despite its variability it is easy to identify, as it is the only species in its group to have a hairy ovary. Its group encompasses plants that have an appendage on top of the anther, which in this case although small of around 0.5 mm can be seen with a magnifying glass.

Many of these inland Persoonia spp. can be highly erratic regarding their flower time. Some plants will produce many flowers, whilst others growing next to it will not even have buds, yet may also bloom 2-3 months later. So finding flowers can be very much a hit or miss situation, but a month or two either side of the New Year, is worth checking inland Persoonia colonies as odd flowering plants are often encountered growing amongst a majority of unflowering ones.

At other times, the majority of plants can be found flowering madly, this from my observations would indicate certain climatic events must occur to stimulate flower and seed production. These plants produce a sizeable fleshy berry that demand favourable environmental conditions to successfully develop, so to take advantage of any passing summer storms, they would need a head start to produce seed successfully. Therefore by staggering flowering times could be a method of increasing their reproductive opportunities.

Flowering is recorded September to December, but the above were flowering during January and February, which may be explained by the spring period being drier than normal with some very hot days, but the following summer being mild with abnormally high rainfall.

The genus Persoonia is part of the very large, diverse and highly ornamental Proteaceae family.