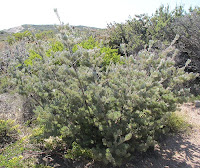 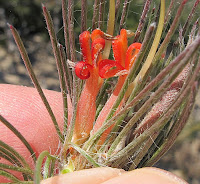 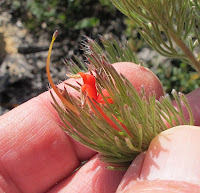 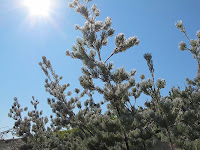 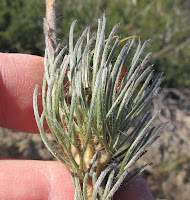 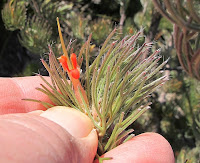 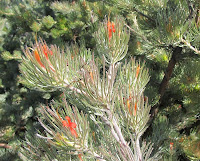 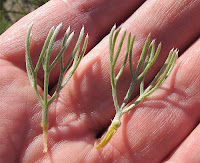 Adenanthos sericeus subsp. sphalma - Woollybush
Due to its soft silky foliage and orange/red flowers, Adenanthos sericeus is highly regarded and commonly grown as a garden ornamental. It has proved to be hardy in a variety of well-drained soils, plus will tolerate strong salt-laden winds.
There are two subspecies, with this one (subsp. sphalma) only found to the east of Esperance at Cape Le Grand and with odd collections to the Israelite Bay region (just west of the Nullarbor). The other subspecies (subsp. sericeus) is from the Albany/ Stirling Range district, but with an odd collection also from Cape Le Grand.
The main difference between them is the foliage, with subsp. sphalma having leaves to 3 cm (11/4”) in length (the leaves of subsp. sericeus are a little longer to more than 3 cm). The leaf divisions are mostly fewer with subsp. sphalma having only 6-15, whereas subsp. sericeus can vary from 6-50 divisions. Subsp. sericeus is also recorded growing to 5 metres (16’) in height, whilst subsp. sphalma rarely exceeds 2 metres (6’) in height.
Adenanthos sericeus subsp. sphalma is very common in sandy soils, often forming extensive thickets on gently sloping ground overlying granite or gravel/rock/clay, with probable deep (light) seepage. The scarlet flowers can be found in bloom at most times of the year and are much favoured by honeyeating birds, plus the tiny, exclusively nectar eating Honey Possum, would also rely heavily upon them (see here).