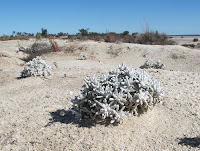 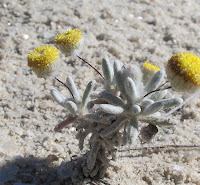 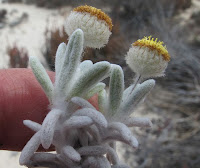 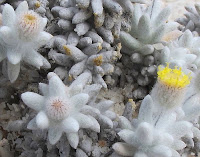 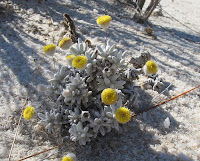 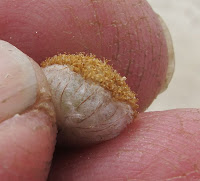 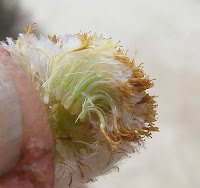 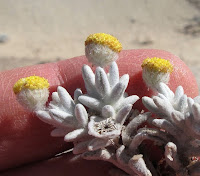 
Locally this species grows on the edge of Lake Tay (150 km or 95 miles NW of Esperance) in granulated (white sand-like) gypsum.  This gypsum formed as crystals on the vast Lake Tay claypan, which were then broken and blown by the strong, hot, prevailing northerly winds to be heaped together on its southern shores.

Asteridea chaetopoda is well protected from this harsh windblown environment by being thickly covered by matted white-woolly hair that not only reflects the suns rays, but resists the inevitable sandblasting in its exposed position, plus creates a life-saving microclimate about itself. There are few other plants that can tolerate these harsh conditions, so although being a small plant of around 10 cm in height x 30 cm diameter (4”x 12”), the Gypsum Daisy has little competition for space from larger species.

The bright yellow flowers bloom before the onset of summer (August to November), so are not subjected to the extreme conditions of its habitat. The seeds have plumed pappus attached (dandelion-like) that act as a parasol to carry it on the wind, far and wide in search of new gypsum habitat to colonise.

There are many salt-lakes in this inland region and due to their remoteness this plant probably remains undiscovered around many as is illustrated by its currently recorded wide and scattered distribution. Asteridea chaetopoda is found from the Meekatharra region (700 km or 450 miles NE of Perth) to the Kalgoorlie region (560 km or 350 miles ENE of Perth), with outlying collections NE and SW of there. It has also been collected from the western edge of the Nullarbor, then jumps across most of the Esperance region to reappear at Lake Tay and further west in the Lake Grace district.

Australian plants in the Asteridea genus were previously listed under Athrixia, which is still current in South Africa, whilst both belong to the Asteraceae (Daisy) family.