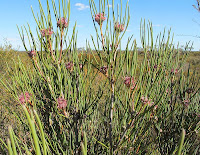 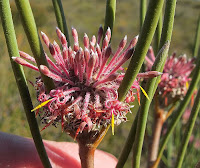 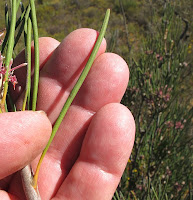 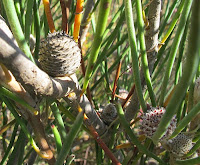 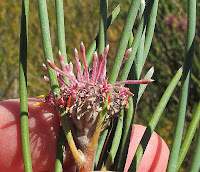 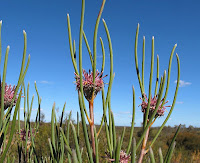 
This species is not common in the Esperance region and is only found in mallee heathland to the northwest; the above occurring in a sandy loam over gravel around 130 km from Esperance. It is however, much more abundant further west, extending to Lake King, Hyden, Southern Cross and the Frank Hann National Park.

There are two other subspecies, neither known to occur in the Esperance region, but they do overlap with this subspecies elsewhere. This subspecies is easily separated from the others by having hairs on the outside of the flowers, whereas the others (subsp. stenophyllus and subsp. scabriusculus) are without external floral hairs and differ from each other by the shape of their leaves.

Locally, Isopogon scabriusculus subsp. pubifloris is an open upright shrub to 1.2 metres (4’) in height, with minutely scabrous (fine sandpaper-like surface) terete leaves (rounded in cross-section) to 13 cm (5”) in length. The pink, purple and red flowers are mostly grouped at the summit of the previous years growth, to later produce a globular cone (over 1 cm or ½” diameter), which disintegrates after fire to release the seed.

Flowering is recorded from August to December, although this would depend on seasonal rainfall with the above starting late September to probably finish by November.

Isopogon is another ornamental genus of the large and diverse Proteaceae family. Plants within this genus are common known as Cone-flowers or Drumsticks.