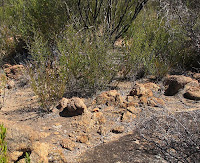 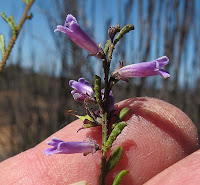 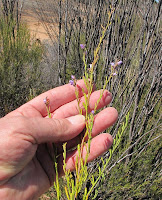 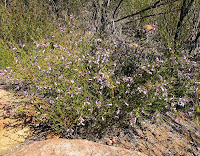 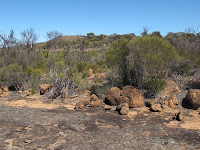 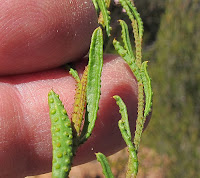 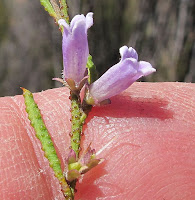 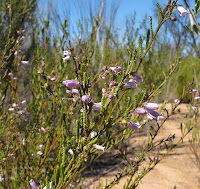 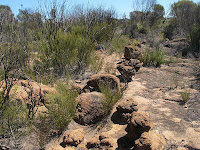 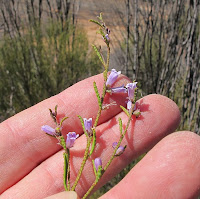 
This species discovered 22 years ago on a remote large rocky outcrop to the NE of Esperance, is now ‘Declared Rare Flora.’ Since then there have been less than a handful of collections and possibly all from the original colony, which currently contains 200-300 plants in a 50 x 5 metres (55 x 5-6 yard) strip of shallow sandy loam (with rocks) over granite; it is an unusual habitat not common to this region.

On the rocky outcrop in question, there are a couple of drainage gullies running across the main slope which catch most of the rainwater run-off and redirects it at a near 90 degree angle. However with heavy rainfall this gully would overflow and the excess water continue downhill on its original course. It is on this east facing overflow section, where Eremophila ciliata is found.

The cross-cutting drainage channels have over eons filled with small eroded boulders, rock and soil, which after the usual winter/spring rains become a moist habitat supporting many plant species. The plants in this unusually good habitat are congested and battle for growing space, a situation not suitable for most Eremophila spp. that would be quickly smothered. However, in the shallow and less watered soil on the far side of this channel, it provides habitat for a few hardy species like Eremophila ciliata that are ideally suited to the semi-arid conditions of the region.

In these drier situations plants tend to be smaller and more widely spaced, thereby permitting slower growing species like this Eremophila to thrive. A bushfire had passed through this area 3-4 year earlier and the E. ciliata plants above had germinated and grown to around ½ metre (20”) in height since. The other (less deep) north/south drainage channel some 100 metres (110 yards) above, was not burnt by the fire and a single untidy Eremophila ciliata plant (2 metres or over 6’ in height) survives. In this location no juveniles were evident, indicating this species like many Eremophila spp. benefit from periodic bushfires to clear large vegetation and stimulate seed germination.

Eremophila ciliata is named after the long fine hairs around the edge of the calyx lobes (base of flowers). These flowers are insect pollinated and quite small, being less than 1 cm (3/8”) in length, but are attractively coloured lilac, blue or purple. The underside of the leaves and stems are prominently covered in round tubercles, whilst the upper leaf surface is hairless and smooth. The most common flowering period would be August and September, but like many of these semi-arid species, they are very opportunistic and will produce blossom after good rain at other times.

The Eremophila genus belongs to the Scrophulariaceae family, but may also be listed by some authorities under Myoporaceae.