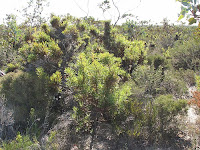 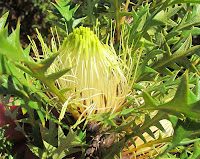 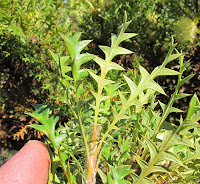 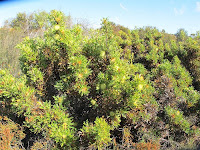 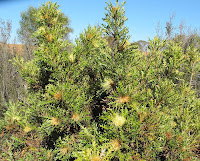 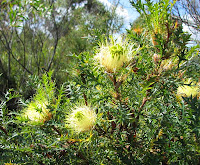 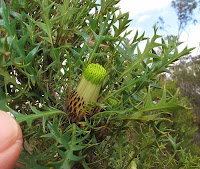 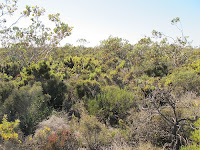 Banksia armata var. armata - Prickly Dryandra
Until recently, Banksia armata was known as Dryandra armata, but the Dryandra genus has now been discontinued and absorbed into the Banksia genus. There are two varieties of Banksia armata and both are found within the Esperance region, with mature plants of var. armata tending to be shorter (to 1.5 metres or 5’ in height), plus having a lignotuber from which it can quickly regrow after bushfires. The var. ignicida on the other hand can be taller (to 3 metres or 10’ in height, although seldom above 2 metres locally) and does not have a lignotuber, so must regrow from seed after fire.
The var. ignicida tends to be a little larger in most respects, with slightly larger flowers and broader leaves, but these alone will not clearly distinguish between them. Probably the easiest method is to count the number of lobes on one side of the leaf, with var. armata having between 6-13, whilst var. ignicida only 5-8.
Banksia armata var. armata is more widely distributed than var. ignicida and stretches from Kalbarri to east of Esperance, whereas var. ignicida extends from a little east of Perth to Albany and then also to the east of Esperance. Both varieties will tolerate a variety of soil types, but sand over gravel, rock or granite are the most popular.
The common name of Prickly Dryandra for these plants is very apt, as they are extremely so and commonly draw blood when being handled. The flowers that are around 2.5 cm (1”) diameter can be cream or yellow and both varieties bloom between June to October, although the more northerly populations are usually first to flower and the southern ones last.
The Banksia genus belongs to the Proteaceae family.