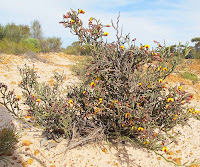 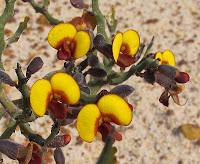 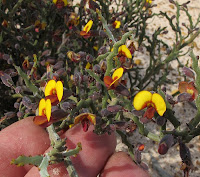 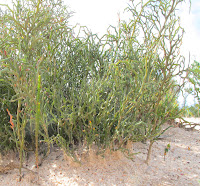 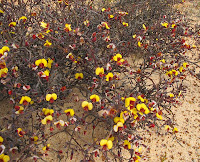 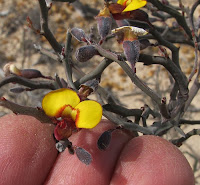 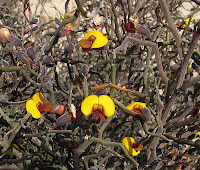 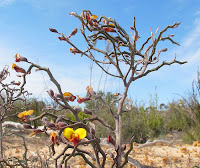 
This species has a conservation code Priority Three rating, meaning it is poorly known and currently only encountered in a few locations not under imminent threat. It has been found W and NW of Esperance from Young River to E of Hyden, then E to the Norseman region and S towards Salmon Gums (N of Esperance). In the colonies I have encountered, plants have been reasonably common, growing after fire in a sandy soil, probably over gravel between Fields Road and Lake Tay, but have also been recorded growing in deep sand elsewhere.

Bossiaea flexuosa is a low spreading shrub (to 60 cm or 2’ in height) commonly producing aerial shoots from a laterally expanding rhizome, which probably permits plant survival and fast regeneration following bushfire. The leaves are minute, bract-like and usually only seen on new foliage growth, but soon fall as the stem matures. The exaggerated flexuose (zigzag) stems, low habit and hairy calyx (cup below petals), easily distinguish this Bossiaea from other related species.

Flowers are produced anytime (depending on local rainfall) from September to November and from observations possibly (on occasion) August too. All Bossiaea plants (as with other pea-flowers) have in Western Australia been placed in the Fabaceae family, but may be listed elsewhere by other Authorities.

Posted by William Archer at 1:55 PM