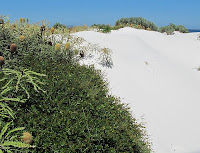 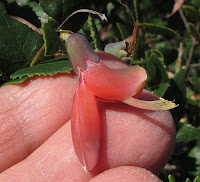 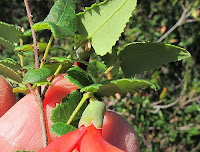 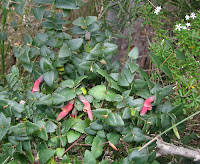 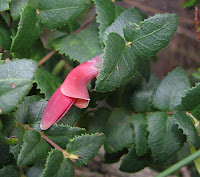 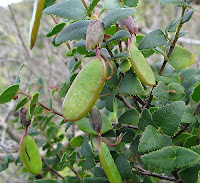 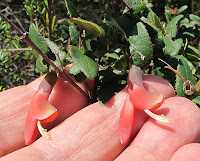 
This species is highly distinctive, being the only Bossiaea with opposite leaves, pendant flowers and a shorter standard petal than the wing and keel petals. In the Esperance region I have only encountered it within sight of the ocean, although in the Fitzgerald River National Park it can also be found a little further inland. Interestingly, it only occurs in three widely separated coastal regions between Albany and Cape Arid, which I suspect reflects its preference for non-calcareous soils, despite growing in beach sand east of Esperance.

The region between Cape Le Grand and Cape Arid (east of Esperance) was in a previous wetter period, a large floodplain where calcareous matter was leached from the soils including the beach area, to provide an unusual habitat for a variety of species. Bossiaea dentata is generally a bushy shrub from 1-2 metres (3’-6’), often growing into each other to form thick hedges against strong salt-laden sea-winds near the beach, elsewhere it can be encountered on granite outcrops and in rocky gullies.

The mostly red flowers (sometimes yellow/green) to 4 cm or (13/4”) overall length, like many other red pea-flower species are believed to attract pollinating birds especially the smaller varieties, who can feed safely and at the same time avoid predators and larger bullying birds amongst the dense foliage. Bossiaea dentata is a spasmodic flowering species and has been recorded from May to November, often producing flushes of blossom during the period probably determined by the amount of seepage into their habitat after rainfall.