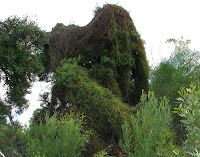 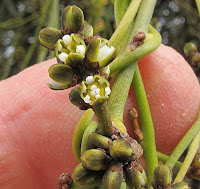 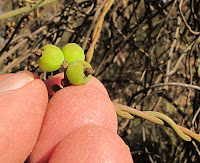 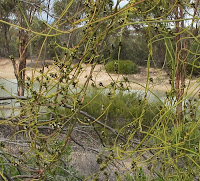 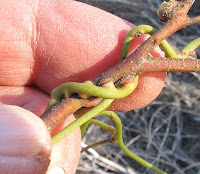 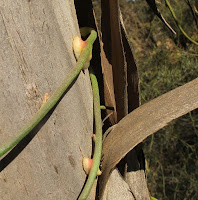 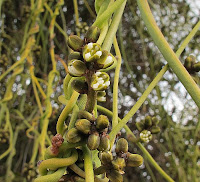 
Most people associate the name Dodder Laurel with highly invasive parasitic weeds that grow on a variety of shrubs to produce a tangled landscape of twinning orange/yellow leafless stems.  Although partly true for some of the smaller Cassytha species, this situation is mainly applicable to the mostly introduced Cuscuta species from the Convolvulaceae family, which are almost identical in every respect and cause considerable identification confusion between them.

Plants from the indigenous Cassytha genus (Dodder Laurels), despite looking very much like the Cuscuta species, actually belong to an entirely different family called Lauraceae that contain such plants as Sassafras, Cinnamomum (cinnamon spice) and the avocado.  Plants from Convolvulaceae on the other hand, have besides their Dodders, the Morning Glory and the Sweet Potato.  The easiest way to tell these genera apart is by the sepals (outer flower parts) as Cassytha has 3 lobes, whilst Cuscuta has 5.

Cassytha melantha is one of the largest, if not the largest Dodder Laurel and is distributed across the southern Australian States of WA, SA, NSW, Victoria and Tasmania.  It is unusual in mostly using eucalypts as hosts, whereas most other species are far less specific.  Birds are attracted to the green berries and will spread them far and wide, but only those that are dropped at the base of smooth barked eucalypts will have a chance of survival, whilst those that do not, even if they germinate will die.

If the seed germinates close to a suitable eucalypt, the seedling will rotate until it finds it, when it will begin to climb and as quickly as possible attach sap-sucking discs on the smooth bark.  These will penetrate into the sap carrying cambium layer from which it will draw most of its nutrients at the expense of the host plant.  These discs are reproduced as it climbs not only for obtaining food, but also for support and with this large food supply, the portion that initially germinated and grew from the ground will die off to leave the dodder laurel totally dependant upon the host.   However it is possible the green stems may be able to photosynthesise in order to supply some food.

Cassytha melantha, so named because of the black hairs on the calyx, can grow 6 or more metres (20’) in height, then over time totally cover the tree that will cause the host plant to lose most of its vigour, although they often survive for many years.  The dodder laurel when it runs out of healthy tissue, will tumble down in search of another host and unless found may die, as the original host becomes unable to supply its food requirements.

The flowers of this Large Dodder Laurel produce an amazing perfume when you get to within two metres of them, which attracts small flying insects like flies, etc, to pollinate them.  The flowers are small (2-3 mm, or less than 1/8” diameter), so would not be noticed were it not for their perfume.  Flowering is recorded from July to November, but these records span a large area and would be dependent on the health and vigour of the host.  Locally, August/September would be the most reliable months to catch them in bloom and to experience their fragrance.

Posted by William Archer at 6:49 PM