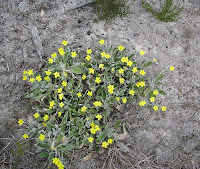 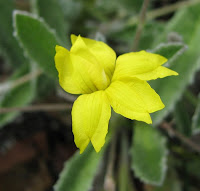 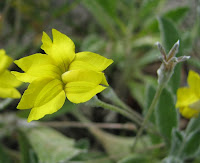 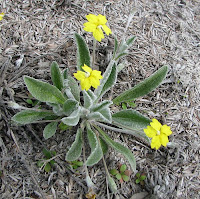 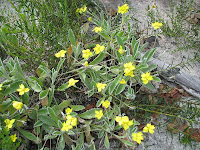 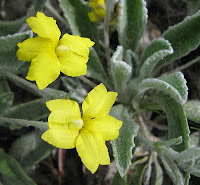 
Goodenia affinis is a low growing perennial herb with large yellow flowers and covered in long silvery, cotton-like hairs, from which its gets the common name of Silver Goodenia. It favours sandy soils, preferably with a clay content and occurs from the Stiling Range (NE of Albany) to the Nullarbor, plus a few records inland between Hyden and Morawa. It is reasonably common and generally forms scattered colonies in open ground (often after fire).

The long silky hairs are multicellular and cover most of the plant, although smaller branched (stellate) hairs are also common, especially on the upper leaf surface. The 1.5 cm (5/8”) diameter flowers are bright yellow and all petals have wide side wings, which combine to make them appear much larger than they actually are. Flowering time is dependent on local weather conditions and is recorded from July to December.