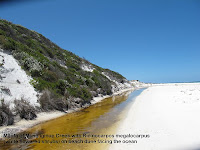 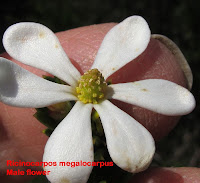 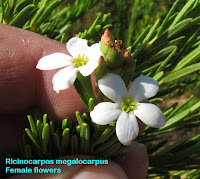 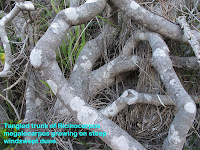 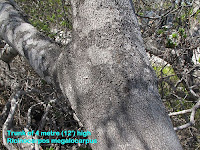 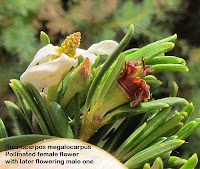 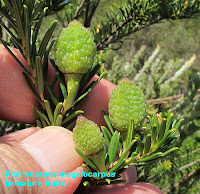 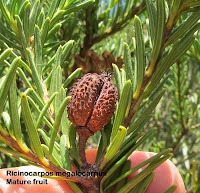 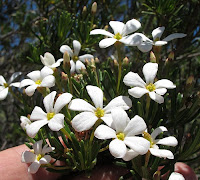 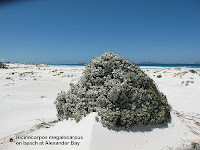 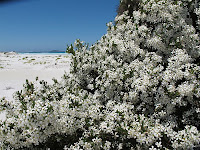 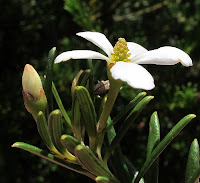 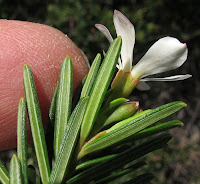 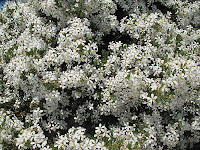 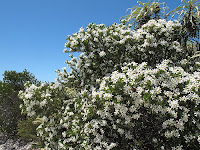 
Plants in the Ricinocarpos genus because of the large showy petals are amongst the most ornamental from the extremely varied Euphorbiaceae family. Ricinocarpos megalocarpus is also a very hardy species, thriving in strong salt laden winds and deep white non-calcareous sand. It occurs from Esperance to Cape Arid 110 km (70 miles) to the east, where it can be very common, growing to 4 metres (12’) in height and usually less than a kilometre/mile from the beach.

The photographs above show the vivid white sand that naturally occurs in this species habitat and most would think they were calcareous (alkaline), but they are not. The section between Cape Le Grand and Cape Arid was an ancient flood zone that probably leeched the sand of calcareous materials, leaving the coastal strip (including the beach) with a pH of around 6 (1 is acid, 7 neutral and above 7 alkaline). This region is nevertheless subject to very stormy weather and strong sandblasting winds, yet Ricinocarpos megalocarpus is very much at home, often taking the full force of whatever nature delivers.

Ricinocarpos megalocarpus produces male and female flowers, usually on the same shrub, but at times with only a single gender. The plants are careful not to self-pollinate, by producing female flowers first and once pollinated (by other earlier flowering plants), then produce the male flowers that far outnumber the females. Apart from insect involvement, pollen is blown by the wind to make contact with the stigma of the female, and due to the large number of male blooms this is not a problem.

Flowers can usually be found at anytime of the year, except during an extended dry period as new blooms are quickly produced after any soaking rain, so flowers and the warty fruits can be found in all stages of development. However the most prolific period, when flowers completely obscure the foliage is mostly between October to late December.

Posted by William Archer at 8:07 PM