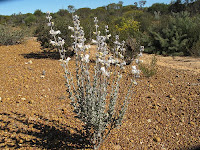 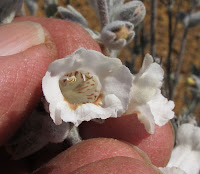 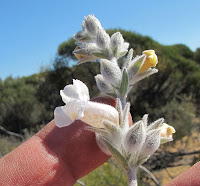 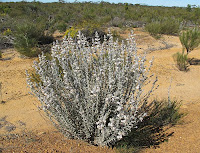 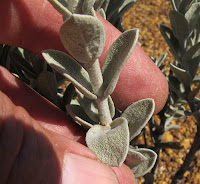 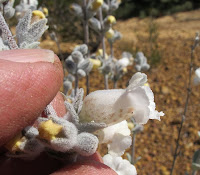 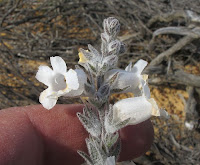 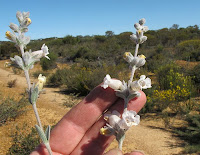 The Native Foxglove is a very exotic looking member of the Lamiaceae family, stirring memories of carefully tended European gardens that are far removed from the semi-arid mallee heath of inland Western Australia where this plant occurs. However being so unusual it will not be overlooked whether in flower of not. Despite a European appearance, it shows its Australian heritage by a dense covering of white hairs, which give a soft grey demeanour and the means to survive a hot dry climate rather than a cooler European one.

Pityrodia terminalis is found to the NW of Esperance and ranges to the Kalgoorlie region and west to the north of Geraldton. The above, which probably represents the extent of its SE distribution, was encountered growing in gravel soil just south of the 4WD section of Fields Road about 110 km (70 miles) from Esperance. It was also seen further west in similar habitat to the south of Lake Tay, so not uncommon in this part of the world.

Growing to a little over a metre (4’) in height, it produces on upright branches 1.5-2 cm (3/4”) long bloated tubular, white to pale pink flowers. However elsewhere these can be a bright red, which must be quite impressive as the local white form is very eye-catching. Flowering is recorded from July to January, but that would be over a large area with different climate zones, so exact timing may vary a little depending on local weather conditions.