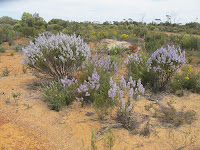 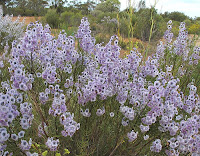 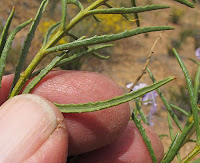 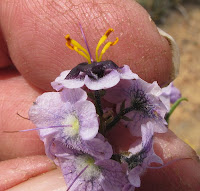 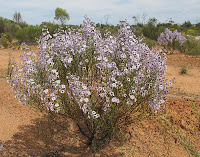 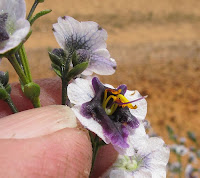 Cyanostegia is an ornamental genus from the Lamiaceae family and one that looks more suited to an English country garden. Yet these delicate looking plants sunbake in the hot/dry inland, from Kalgoorlie to inland Geraldton, SE to Lake Grace, then east to south of Lake Tay, 140 km (85 miles) NW of Esperance.

Locally growing to a little over a metre (4’) in height, this species favours sand/gravel soils in mallee heath. The terminal floral clusters appear mauve to pale blue, but this coloration is from the large colourful calyces (flower base or cup), the actual flower is the smaller dark purple, five lobed corolla that sits just above the calyx on a short tube and will promptly drop at maturity.

Presumably the soon deciduous corolla attracts pollinating insects before they fall, possibly by ultraviolet light that is invisible to us, but not to many pollinating invertebrates. Flowering is progressively anytime from July to November, although the flower-like calyces could exceed this period whilst the seed matures.

There are five Cyanostegia species, all occurring in WA (four endemic), with one species extending into the NT. The four endemic species are found in the southern portion of WA, but only C. angustifolia extends into my Esperance region, the others grow further to the west.