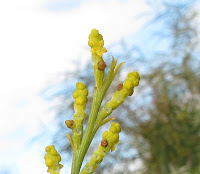 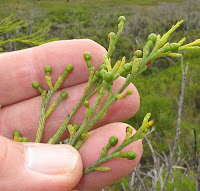 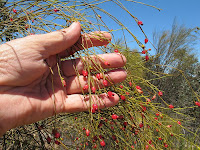 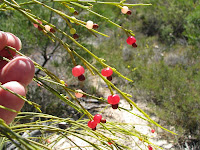 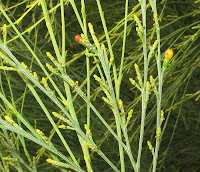 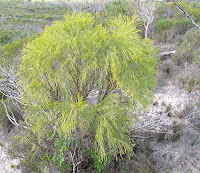 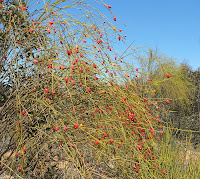 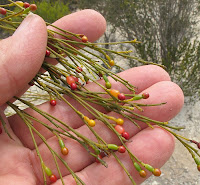 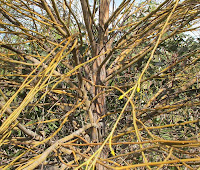 
Plants in the Exocarpos genus are partial root parasites, as are most species within the Santalaceae family. They are particularly widespread in Australia, with Exocarpos sparteus occurring in all mainland States including the Northern Territory, which is testament to its hardiness and adaptability to climate and habitat type. In WA it is widespread around the coastline, favouring calcareous sands over limestone, although not exclusively. Because of this limestone preference, it is also locally common in the inland mallee, where sandy loams overlie limestone, although it extends much further north in a variety of habitats.

Exocarpos sparteus is a graceful weeping shrub or small tree, frequently growing between 2-4 metres (10’), with smaller ones produced in very harsh conditions. The growing environment also influences the color of branches (leaves do form, but are small and fall early), with attractive green forms occurring in less extreme coastal situations. Their ability to tap into the nutriments of other vegetation, greatly assists this species considerable adaptability and widespread distribution.

The flowers are tiny and not noticed unless sought, but they develop into colourful edible fruits with the actual seed positioned at the extreme end. The juicy edible portion is the preceding expanded pedicel (flower stalk), which is initially green, but develops via various color stages to scarlet. Aborigines considered these fruits children’s food, for despite being sweet and tasty are too small and nutritionally insufficient for serious adult consumption. However they are much favoured by birds from parrots to emus, who swallow the succulent fruit and the seed to spread the latter via their droppings.

With such a widespread plant, they can apart from winter, be found in flower and fruit at almost any time of the year, although locally fruit are commonly available during December and January.