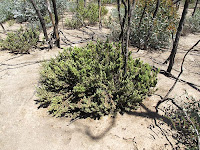 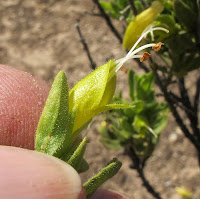 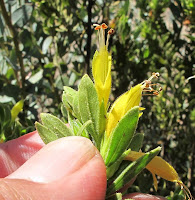 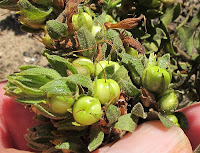 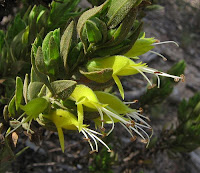 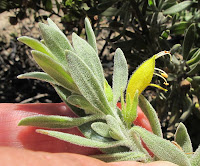 
There are currently over 200 Eremophila species, with more being progressively added as they are discovered. This is because they tend to prefer the dry interior of Australia, which covers a very large area, is remote, unpopulated and consequently poorly collected. Eremophila subfloccosa tends to occupy the mallee region a little inland from the WA agricultural wheatbelt, although odd collections have been made closer to the coast. There are three subspecies of which only one (subsp. glandulosa) is recorded for the Esperance region; subsp. subfloccosa is located to the east and northeast of Perth, whilst subsp. lanata is scattered further inland and often associated with Triodia spp. (Spinifex). Subspecies glandulosa and lanata are also found in South Australia.

Eremophila subfloccosa subsp. glandulosa is common, particularly after bushfires, growing on flats and low lying mallee woodland in a sandy loam over limestone. Here it will thrive for several years until surrounding vegetation begin to command sunlight and available moisture, when it will go into decline and disappear until the next bushfire. It is probably in its prime 3-4 years after fire when the foliage is fresh, green and soft, however dry conditions brought about by competition and/or drought, shrivels the persistent foliage to degrade its otherwise attractive appearance.

Eremophila subfloccosa is named after its dense covering of hairs, which with subsp. glandulosa are mainly glandular, although in some forms there is also a thick covering of branched hairs, but glandular ones can always be found. This subspecies grows to around half a metre (18”) in height x a metre or more (4’) in diameter. The flowers are usually a clean yellow color, but green flowered forms also occur.

Birds are attracted to this species, whose flower is shaped to accommodate their bill and deposit pollen on their forehead, which may be passed on when visiting other blossom. Like many species from arid regions with limited rainfall, it will take advantage of passing storms to produce additional flowers and may have them, plus mature fruit at the same time. With this in mind, Eremophila subfloccosa subsp. glandulosa is officially recorded flowering from September to November, but they commonly produce blossom at other times, with some photos above having been taken during August and January.

The Eremophila genus is usually placed in the Myoporaceae family, but the classification system in use by the WA Herbarium and others, now places it into Scrophulariaceae, which I am obliged to follow.