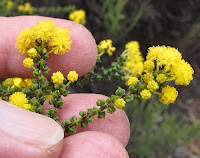 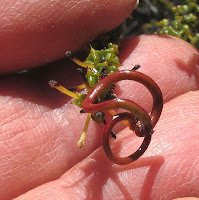 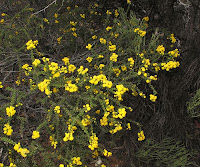 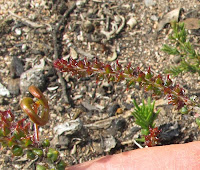 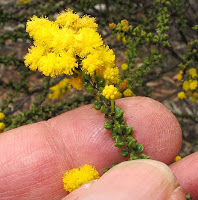 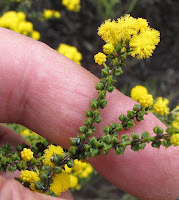 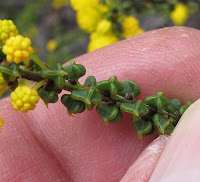 
Acacia tetraptera is a most unusual wattle by having phyllodes (leaf-like petioles) that in section are shaped like a cross, formed by four thick wings that when combined are as wide, or wider than their length. On initial sighting it appears to be one of the triangulate wattles, which have small triangular shaped phyllodes, but these although also small, 5 mm (1/8”) in length, are quite chunky and closely arranged. New growth is reddish and not unattractive.

This wattle is on the edge of my designated Esperance region, being over 120 km (75 miles) NW of Esperance and a little south of the Peak Charles National Park. Here it grows in a fine gravel/clay loam over clay, or limestone in low-lying flats where subsurface moisture would be retained longer than more elevated sites.

Generally Acacia tetraptera is a low spreading plant of around 60 cm in height x 1.2 metres in width (2’x4’), it grows in a woodland habitat, but after fire would be quite exposed for 3-4 years until the dominant mallee eucalypts could again provide shelter. Rainfall in the area is on average 30-40 cm (12”-16”) per annum.

The flowers are produced during August and September and are a showy golden yellow,  They tend to be produced at the ends of the arching branches, thereby complimenting a most engaging species.

Posted by William Archer at 6:50 PM