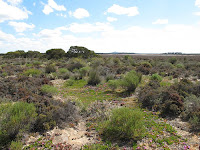 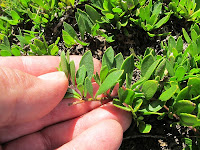 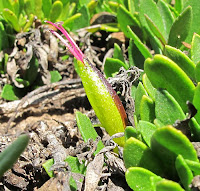 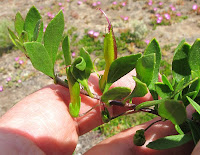 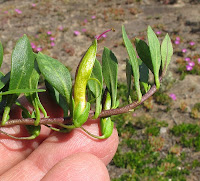 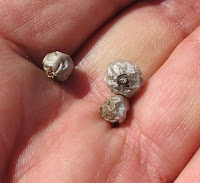 
There are many Eremophila species in the Scrophulariaceae (Myoporaceae) family, but there are few that are completely prostrate. Eremophila serpens is one these and is restricted to the surrounds of playa lakes to the NE of Esperance and NW of Ravensthorpe, where not common anywhere and very localised to small areas within these regions. To the NE of Esperance, it is mainly located in the southern parts of the larger saltlakes like Lake Halbert, where far out on the samphire flats it grows in thin strips of a non-gypsum brown sandy loam. These are highlighted from a distance by the sparse growth of a Stipa sp (Spear Grass) and low non-succulent shrubs.

The gypsum impregnated samphire zone forms around these small sandy loam patches and usually has expanded, leaving them in a shallow hollow. There are often several strips of these sandy loam areas from near the shoreline to close to the open dry saltlake, which is to ½ metre (18”) below the samphire region. Eremophila serpens is usually found nearest the saltlake, where there are sizeable open spaces and apart from a few annuals, very little else grows, thereby providing an ideal non-invasive environment for this prostrate plant to grow. In the habitat photo above, Mt Ridley can be seen in the distance.

The leaves stand upright (as do the Flowers) and are a bright green; the flowers are also green, but paler and have a brown/red stripe down the top of the corolla. These flowers (unless in large quantities) are very difficult to see and require some investigation to find them. The flower structure is designed for bird pollination and I have seen honeyeating birds hopping around on the ground to visit, but how they initially found them is a bit of a mystery as they are so well camouflaged, now the knowledge must be passed down from parent bird to fledgling.

They flower irregularly, probably being highly opportunistic and producing blossom after good rainfall, consequently they have been recorded from September to December and from March to May. Eremophila serpens has a Priority Four – rare rating, which means ‘taxa which are considered to have been adequately surveyed and which, whilst being rare (in Australia), are not currently threatened by any identifiable factors.’

Update: December 2010
The WA Herbarium is now using a different classification system, in which the Myoporaceae family has now been absorbed into the Scrophulariaceae family.