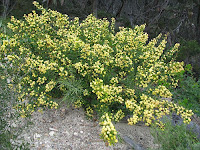 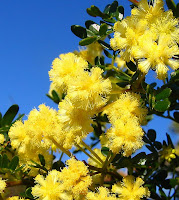 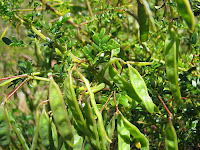 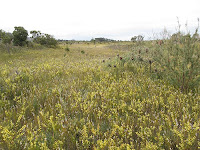 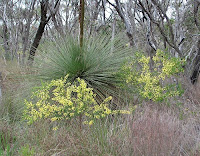 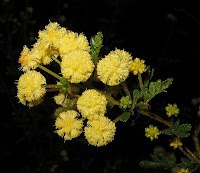 This acacia could rightfully be called the Esperance Wattle as it is found in coastal and near coastal areas from Esperance to Israelite Bay 180 km (110 miles) to the east. It also grows on some of the Recherche Archipelago granite islands, but despite being coastal, it prefers non-calcareous soils that extend to the beach from Cape Le Grand to Cape Arid and form a major part of this plants distribution.

Acacia nigricans is a very common shrub in low-lying sandy areas particularly after bushfires, when it can dominate for several years to form extensive colonies along flood plains and around granite outcrops. Occasionally it will reach 2 metres (little over 6’) in height, but Acacia nigricans is usually half this size and will form a bushy spreading shrub (space permitting), otherwise due to mass germination and less space is more spindly. However where dominant it is still quite easy to walk through as they are flexible and without prickles (see photo above where most yellow flowers belong to this species).

The deep green pinnate foliage mostly has 3 pairs of pinnules, but these can vary from one to four. The flowers are a pale yellow and bloom from July to November, although August/September would be their most floriferous period. There are many Acacia species in the Esperance region, but the only one that could be confused with this species has sharp spines along the stem and deeper golden flowers, and although not as widespread as Acacia nigricans, they can sometimes be found growing together.

Posted by William Archer at 7:18 PM