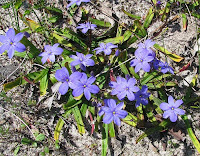 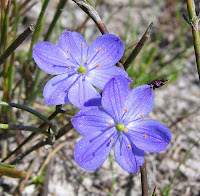 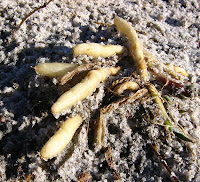 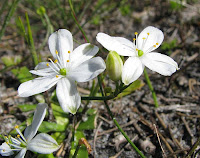 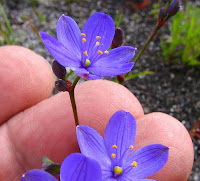 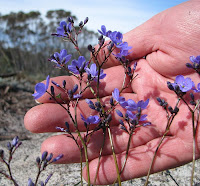 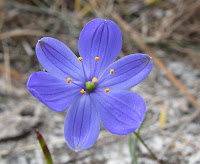 
The genus Chamaescilla in Western Australia now belongs to the Asparagaceae family, but it has been moved around quite a bit recently and the question as to exactly where it should be placed still has a question mark with some authorities. Some retain it in Liliaceae, although Laxmanniaceae and Anthericaceae are also used, but as the WA Herbarium have placed it under Asparagaceae, so shall I.

Chamaescilla corymbosa var. corymbosa is an ephemeral herb, growing from a tuber to produce a rosette of linear leaves and flowering (depending on moisture availability) between July and December. It then dies back to the tuber to appear again the following year. Aborigines would eat the tubers (about the size of a child’s little finger) that are easily gathered with a digging stick as they are often numerous and near the surface. The ones I have sampled (after the plant has died back to the tuber) had a starchy flavour a little like a potato and are pleasantly crunchy.

Flowers are mostly blue, although they grade from a deep to a pale blue and even white. They are extremely common and widespread in sandy soils, which can be over gravel or granite or with a peat content in low-lying areas and subject to heavy rainfall flooding. They range in WA from Israelite Bay (east of Esperance) around the coast and through the wheatbelt to Kalbarri (around 500 km or 300 miles north of Perth); it also extends across the southern part of Australia (excluding the dry Nullarbor and western SA) to Victoria and Tasmania.

These herbs range inland to the mallee region, but only where there are sandy loam soils and if these overlie clay/gravel, the Blue Squill plants are likely to be much larger, growing to over 30 cm (12”) in height, whereas in deep sand they are usually less than half that, which probably indicates a higher level of soil nutrients. Like most small plants they greatly benefit from the interaction of bushfires that reduce competition from shrubs, plus the fertilising wood-ash will encourage their flowering to produce blue floral carpets in some habitats.