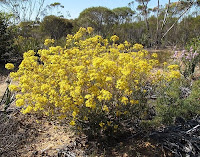 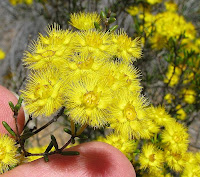 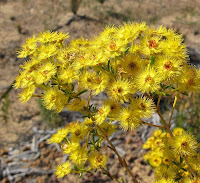 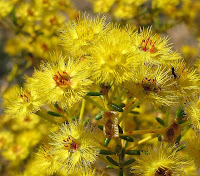 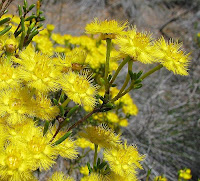 There are three reasonably common yellow Verticordias in the Esperance district, with Verticordia chrysantha having the largest flowers. It is also very common to the west, north and NW of Esperance, where usually encountered in sandy soils over gravel, or gravel alone.

Growing to a little under a metre (3') in height and quite bushy, the flowers are a bright yellow fading to gold with a reddish center. Of the other two yellow Feather Flowers that also grow to the west of Esperance, one is very similar, although the flowers and leaves are a little smaller, this is V. chrysanthella and is more coastal west of Lort River. From the ones in this region (may vary further west), the calyx and petals are around 3 mm in length (certainly less than 4 mm), whilst Verticordia chrysantha are at least 4 mm in length. So although you may not be able to identify them from the car window, but armed with a rule it is reasonably easy.

The third yellow Verticordia, V. acerosa var. preissii has flowers of similar size to V. chrysanthella, but the leaves, particularly near the flowers tend to be flat and oval, plus more crowded. The lower leaves are usually longer and terete (round in cross-section).

Verticordia chrysantha is recorded flowering from August to January, although locally they tend to bloom a little later, starting around September/October.