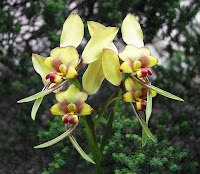 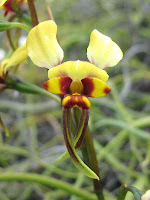 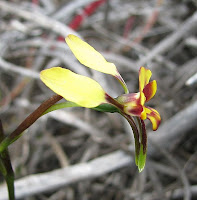 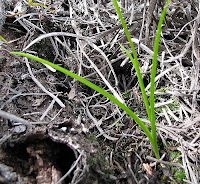 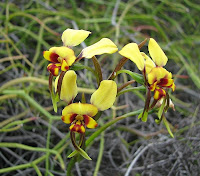 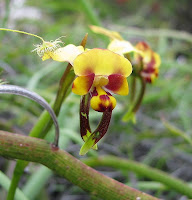 Diuris conspicillata is an orchid of very limited distribution and is known only from a couple of coastal granite outcrops near the township of Esperance. It is distinguished from other Diuris by the clean dark spectacle-like markings at the base of the lateral labellum lobes, a feature consistent with all orchids observed.

The habitat was shallow white sand over a thin layer of limestone, which in turn overlay the dominant granite. Drainage off the rock, either seeped down slopes onto small level habitat patches, or collected on larger more level areas where drainage and evaporation would be slowed. In all colonies seen, the orchids were growing within, or on the edge of Platysace compressa, the (common to granite outcrops) clumping Tapeworm Plant, which probably supplied shelter and built a moisture holding humus soil structure more suitable for Diuris development.

Growing to over 30 cm (12") in height and with flowers approaching 4 cm diameter (1.5"), they are quite noticeable during August and September when in bloom.