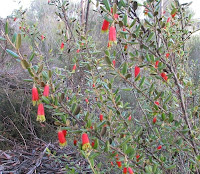 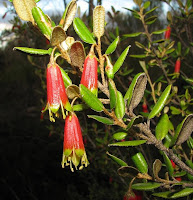 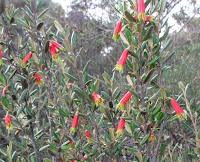 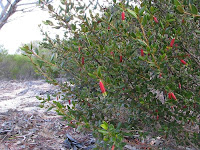 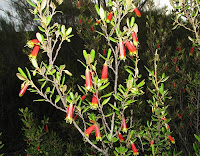 Nematolepis phebalioides is the only WA member of this genus, but looks very much like plants from the Correa genus (same Rutaceae family) of the Eastern States. Although appearing similar, the flowers of Nematolepis have their floral components (petals, sepals and stamens) in groups or multiples of five, whereas correas are in groups and multiples of four. The leaf arrangements are also different, with Nematolepis having them alternate, whilst correas have them opposite.

Like most correas, Nematolepis phebalioides is attractive to honeyeating birds and is often found in sheltered semi-shaded locations, although they will also grow contentedly in full sun, where they tend to be shorter and more bushy. Most plants in the Esperance region are less than 11/2 metres (5'), although they are recorded growing to twice that size elsewhere. Here they are mainly found inland on a fine sand/clay soil over limestone, typical of Mallee regions. In this environment they are commonly encountered on rises surrounding small ephemeral waterways, and rises around freshwater and salty playa lakes (they do not grow in wet or salty soils, but in well-drained soils refreshed by rainwater run-off).

The tubular flowers are around 2-2.5 cm (almost 1") in length and can flower for extended periods, providing the often unreliable rainfall is reasonable. However they are recorded blooming from March to December, but some flowers can usually be found at anytime, providing drought conditions do not prevail.

Posted by William Archer at 6:04 PM