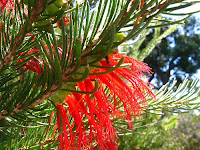 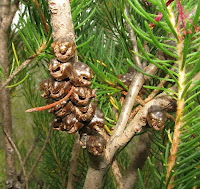 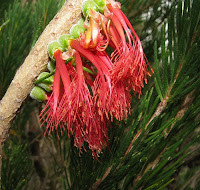 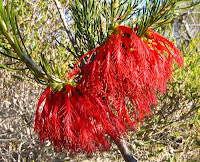 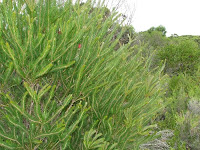 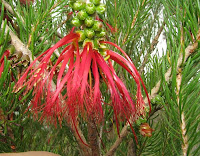 An extremely hardy and widespread shrub to 3 metres (10') in height, although more commonly closer to 2 metres (6'6") or even less. I have encountered this species from within metres of the coast to high inland granite outcrops. Also I have seen it growing in acid or slightly alkaline sandy soil, particularly when over clay, gravel, limestone or rock. However there is one place where they are nearly always found, which is in rocky gullies on granite outcrops where they can form dense impenetrable thickets, although you can often crawl into them on hands and knees. In this cool sheltered environment where the soil has been enriched by the slow decomposition of their leaves, numerous orchids, fungi, lichens and mosses are to be found, along with the scratchings of local indigenous mammals.

With such a widespread plant and a liking for so many habitat types, there are numerous forms that sometimes make positive identification difficult, especially if too much attention is placed on the foliage. The leaves can be long or short, deep green to yellowish, hairy or not, flat and broad or thin and round, plus with or without bumps. To help identify, the stamen bundles of the flowers will number only 4 and will be of equal width, length and general appearance, not 5 and/or unequal as with most other species. The top of the seed capsules are reasonably distinctive too.

The One-sided Bottlebrush has small petals, but large bright red stamen bundles that make a striking display over many months. The honeyeating birds are greatly attracted to this shrub and are constantly moving from flower to flower, whilst small insectivorous species scramble through the thickets in search of invertebrates. Flowering can span from June to December, but with good rainfall it can bloom even longer.


Update: December 2010
In the Nuytsia publication of the WA Herbarium Vol. 20, the species Calothamnus quadrifidus has been divided into a number of subspecies, but only subsp. quadrifidus is listed for the Esperance region. This subspecies is by far the most common and widespread, by occurring from Israelite Bay (east of Esperance) to south of Geraldton. It is separated from other subspecies by having all or most leaves less than 3.5 cm (1 3/8”) in length; they are also terete or semicircular in cross section, plus usually hairy. I might add that locally it is still a highly variable shrub, although falling into the above specification.